March is upon us, and Top Shelf is, as they say, roaring in like a lion! This month's edition of Diamond Previews has an incredible FOUR summer releases from Top Shelf that you won't want to miss:

Superheroes meet social justice as the wildly popular webcomic comes to print, blending action with relatable young-adult drama and remarkably thoughtful philosophy. This full-color collection features over 300 pages of the ongoing series plus a brand-new short story. Coming in June 2018!

The good folks at Entertainment Weekly talked with our own Chris Staros and Leigh Walton to get the inside scoop on what's ahead for Top Shelf this year! Take your first look at those gorgeous covers and get excited for:

All with exclusive commentary from Chris & Leigh. Check it out, only on EW! 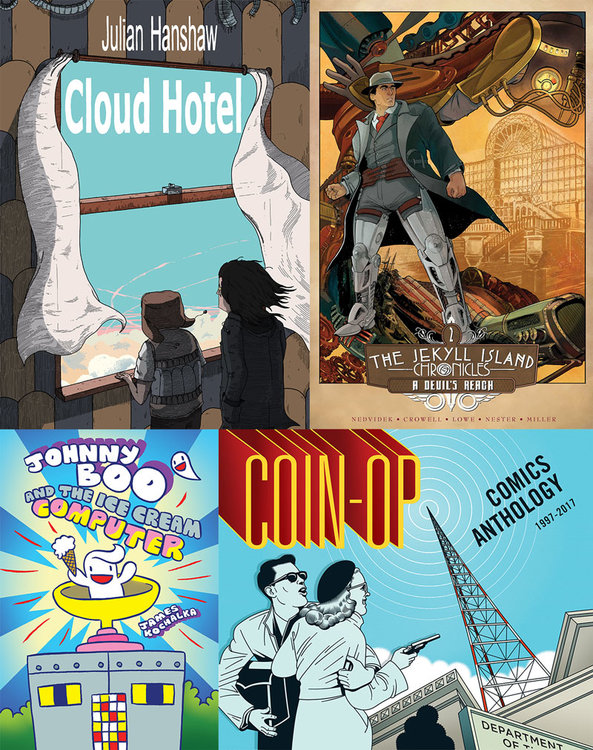 The February Diamond Previews catalog is packed with new Top Shelf graphic novels for May & June release — and now you can see a 4-page preview of each one! 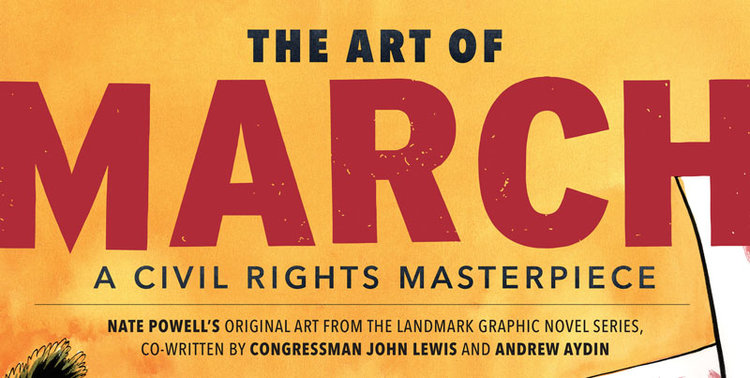 Nate Powell's original art from the groundbreaking March trilogy is on the road!

And in New York City, the Society of Illustrators has just announced "The Art of MARCH: A Civil Rights Masterpiece" to open February 28 and run through June 30.

Museum-goers on both coasts will get a chance to see the award-winning work of Congressman John Lewis, Andrew Aydin, and Nate Powell like never before, up close and at full scale.

Check the links above for details on both exhibits, including a host of special events! For starters, you can join Nate Powell tomorrow night in San Francisco... 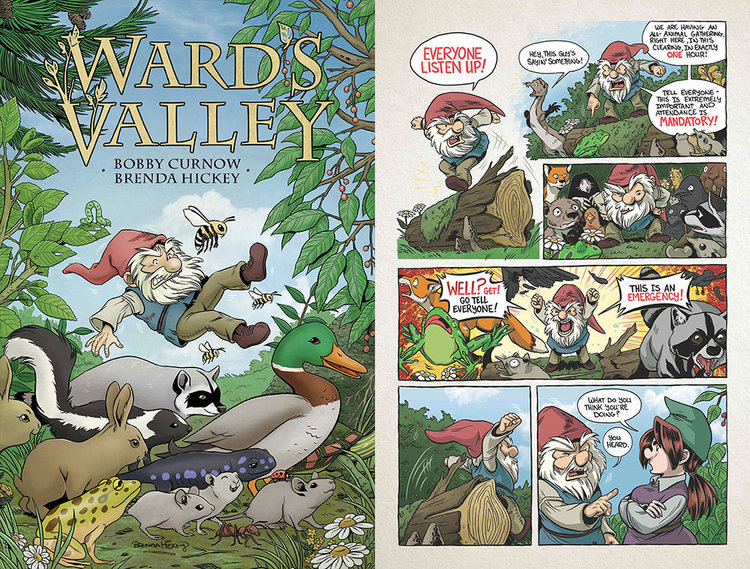 Pre-order now for release in April 2018!

Praise for Bobby Curnow & Brenda Hickey:
“A modern myth that evokes the agelessness of the best folktales but is a completely new invention.” — Newsarama
“Hickey’s artwork is outstanding.” — Comic Wow!
“Depth of characters and story are what really drive this book to be one of the best out there right now.” — Comic Attack
“Fantastic... the artwork is magical.” — Florida Geek Scene

Ward is a grumpy gnome who only wants to be left alone. He never asked for company… but when his beautiful forest starts filling up with animals, it’s more than just grumpiness that makes him nervous. Mysterious muck-trolls and terrifying humans are invading, and he’ll need all the help he can get to defend Ward’s Valley.

"Pay What You Want" for 25 of our greatest books — and support great charities — with Humble Bundle! 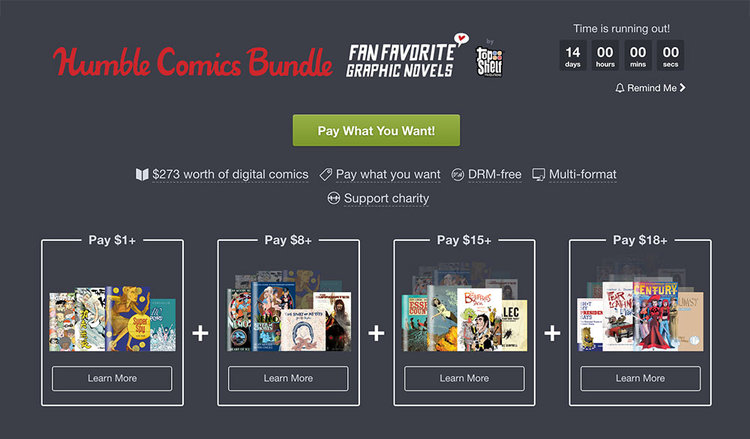 Our friends at Humble Bundle are offering one heck of a deal, starting today and running for the next two weeks only. The result is a win-win that supports The Hero Initiative's work with comic creators in need and Traveling Stories' work providing books to underprivileged kids — while introducing you to a few of your new favorite graphic novels!

Name your own price, and for as little as $1, you'll get DRM-free digital editions of books that will knock your socks off, with more and more books "unlocked" as you scale up.

Visit Humble Bundle for more details and to grab your bundle today! 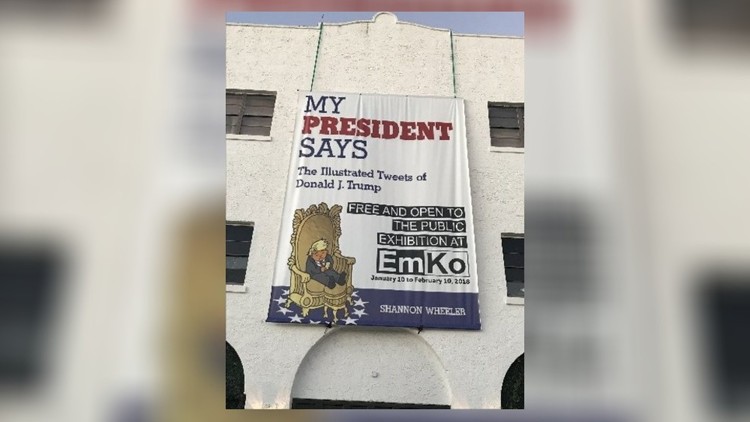 The key to success on prom night? Wearing the right suit. 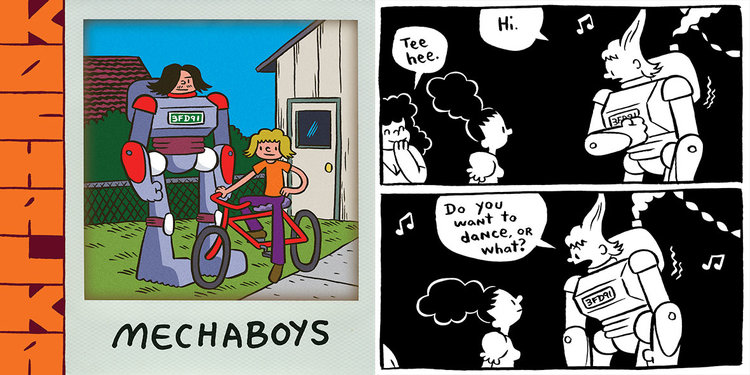 Two lovable dirtbag teens, tired of being bullied, build a robot battle suit to take revenge on their entire high school. But they never expected to become… kind of popular?

Packed with frustrated teens, slam-bang plot twists, and moments of genuine sweetness, Mechaboys is a thrilling new direction for Kochalka and an unmissable graphic novel event.

Read a 7-page preview and pre-order now from your favorite retailer! 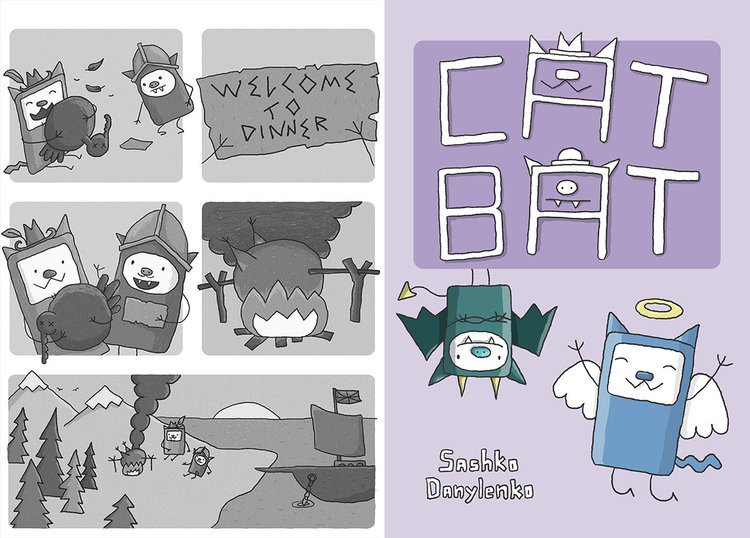 There's no friendship quite like the friendship between two idiots. Celebrate that special bond with these delightfully creative comics -- packed with mischief and mayhem in the vein of Beavis & Butt-Head, Ren & Stimpy, and Broad City.

Cat and Bat are best friends. Every day, they watch awful television, get awful ideas, and get into an awful lot of trouble. In the grand tradition of silent comedy, award-winning Ukrainian animator & artist Sashko Danylenko presents an addictive collection of strips that reveal painfully funny truths about human nature.

Read a 5-page preview now and pre-order now from your favorite retailer! 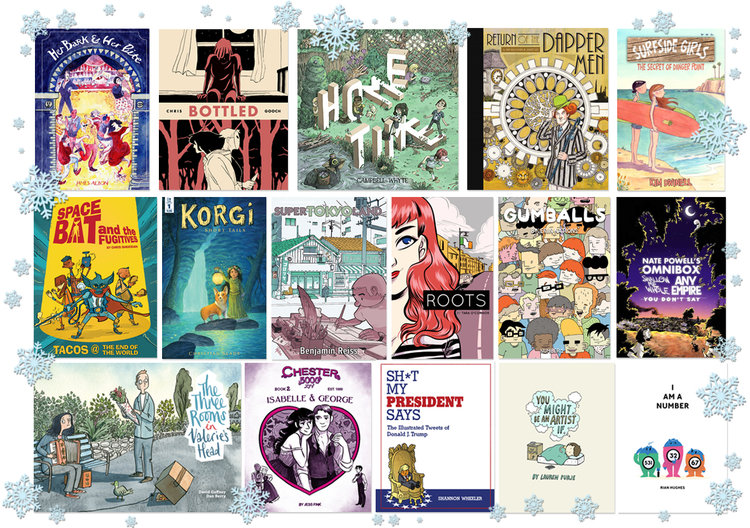 Her ex-lovers are all dead... in THE THREE ROOMS IN VALERIE'S HEAD! 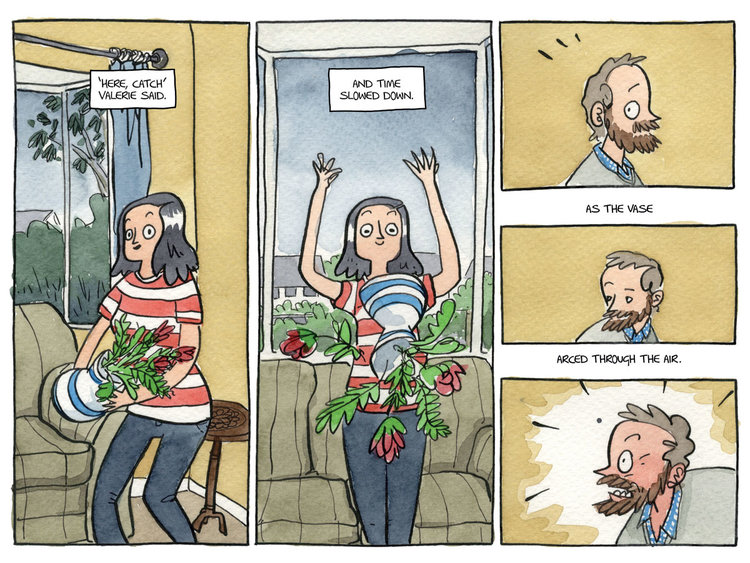 Falling in love is easy. But it's not the fall that kills you.

Valerie has a rich interior life. Serially unlucky in love, to feel better she imagines that her previous boyfriends are dead and that their bodies are kept downstairs in the cellar in a strange, mummified state. Every day she brings them upstairs and speaks with them about what went wrong.

What follows is a series of peculiar, funny, and sometimes disturbing short tales about inept lovers, weird obsessions, and socially malfunctioning men who repeatedly fail to build a relationship with poor Valerie.

Apart from Stanley. Stanley was special.
Could he be the one to save her? 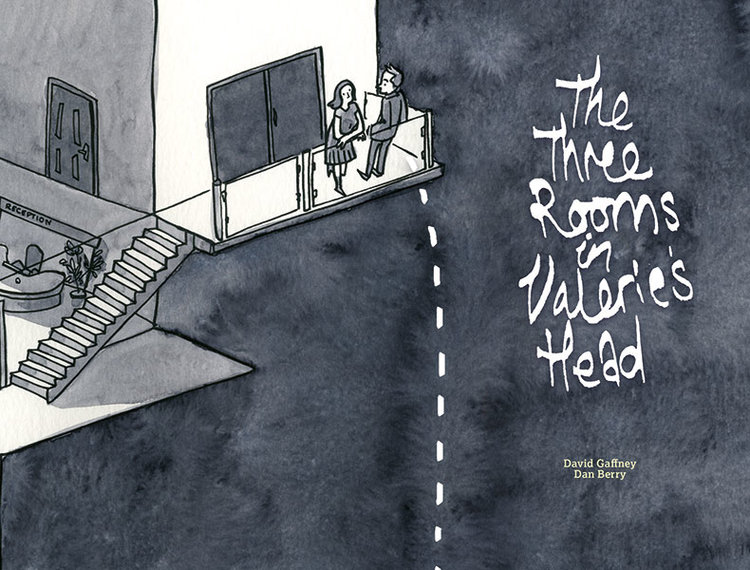 The Three Rooms in Valerie’s Head is a full-color softcover graphic novel with French flaps, 9.5" x 6.5" (landscape), 120 pages. Check out a six-page preview and pre-order now from your favorite retailer!

New York Comic-Con is next weekend! 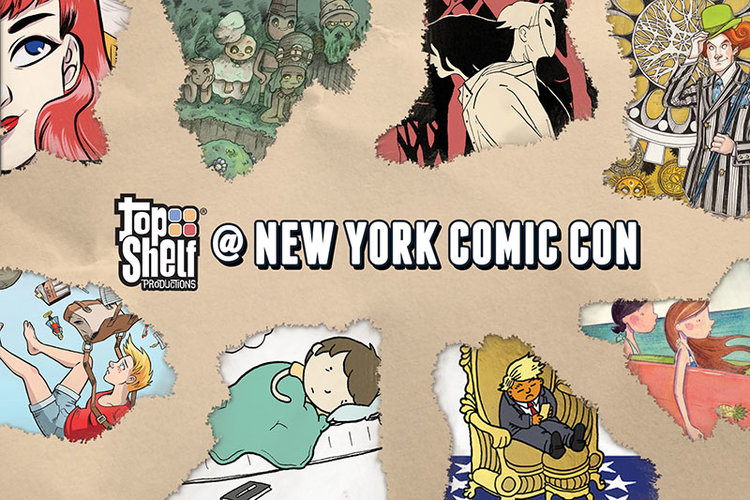 Plus: join us Sunday, October 8 at 2:30pm in room 1A18 for a festive panel with these & other authors, plus coming attractions!

It was a good night to be a robot lover.

At the Small Press Expo earlier this month (as Top Shelf celebrated our 20th anniversary!), the Ignatz Awards went to all kinds of amazing indie cartoonists. But we were particularly proud to see two winners from the Top Shelf family:

Congrats to all the nominees and winners, and stay tuned for more on Girl Town! 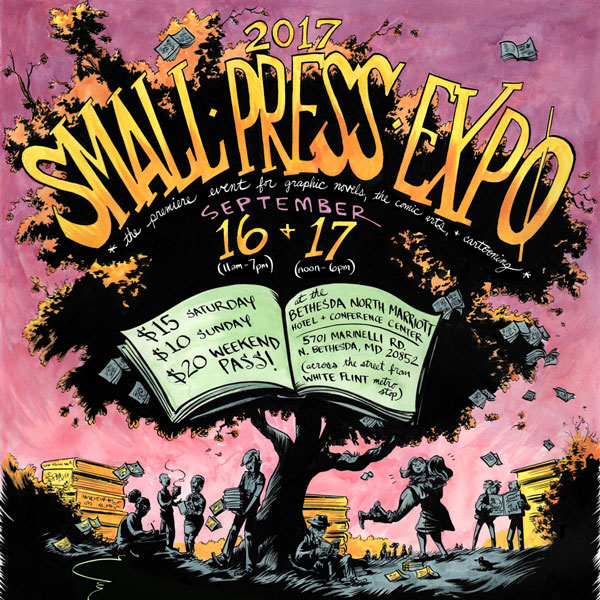 This weekend, America's indie comics community descends once again on our nation's capital for the Small Press Expo (SPX), September 16-17, 2017 at the Bethesda North Marriott in Rockville, MD. And Top Shelf will be spending it as we've done for 20 years now: bringing you brilliant comics from veteran creators and brand-new talents alike!

Stick around Saturday night for the Ignatz Awards ceremony (featuring nominees March and Chester 5000) — and read on for four killer panels featuring Top Shelf talent you won't want to miss: 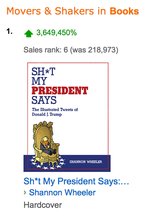 Congratulations to Shannon Wheeler, whose new book Sh*t My President Says: The Illustrated Tweets of Donald J. Trump comes out in stores today & tomorrow. This 120-page hardcover, in which the award-winning cartoonist and satirist tackles the 140-character president, has blown through the roof with a staggering 3,649,450% climb on Amazon's bestseller charts, easily reaching #1 on the "Movers & Shakers" list and cracking well into the top 10 of all books!

Of course, this avalanche of demand has blown through Amazon's inventory, but they'll be restocked very soon, and the book lands in bookstores everywhere today, followed by comic shops tomorrow. Ask for it by name! (Well, you might have trouble with the asterisk...)

For more on Sh*t My President Says, visit Shannon's interview with the Washington Post, or visit the book's official web site!