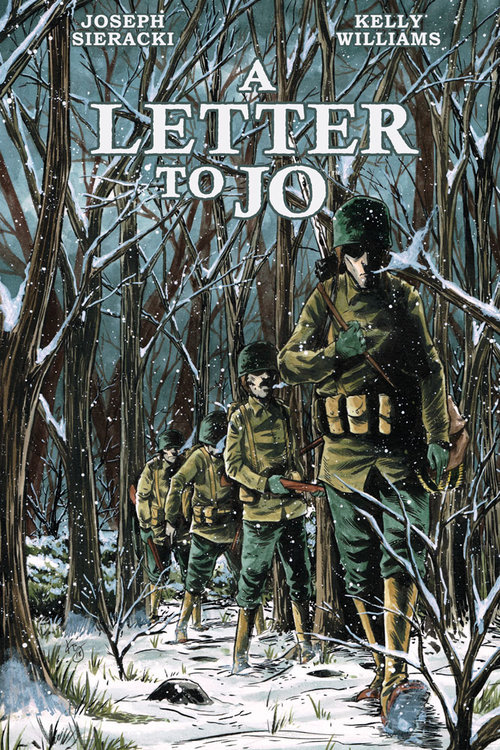 "Sieracki effortlessly adapts his grandfather’s letters into a narrative that feels both intimate and sweeping... Williams captures the desolation of the battlefields and the bloodcurdling violence of government-sanctioned killing. But through it all, the love story conquers the darkness so hauntingly illustrated." — School Library Journal

“There’s a horrible beauty in Williams’ depiction of the war experience, like isolated segments from a Bosch painting transported to the war in Europe. What A Letter To Jo accomplishes is placing that personal experience of Leonard in a wider context, the war experience as well as the romance with Sieracki’s grandmother. It is, truly, the American story of that era. ” —The Beat

"It’s both beautiful and terrifying, and not to be missed." — 13th Dimension

"A Letter to Jo serves as a touching tribute to those affected by war, and small glimpse for those who are lucky enough to never experience it... Kelly Williams uses incredibly detailed line work mixed with some of the best watercolors I’ve ever seen in a comic." — AiPT

Now, Josephine and Leonard’s grandson Joseph Sieracki has carefully researched the battles Leonard describes and expanded the letter into a moving tale of a young man’s fears and bravery far from home. Brought to heart-wrenching life by the paintbrushes of Kelly Williams (Creepy, Eerie), A Letter to Jo is at once a tender love story and harrowing battlefield memoir. -- a 144-page, full-color softcover graphic novel with 3” French flaps, 6 5/8" x 10 3/8"