Three cheers for intern Emi Lenox, who kick-started this blog after waaaaay too long. I will stand by my word and do recaps of my trips to Vermont and Sweden. Soon. 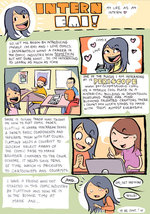 And make sure to check out our new running feature strip on Top Shelf 2.0, Bob & Ivan!

Bob & Ivan is the brain child of Philip Witte and John Littleboy. I asked Phil if he could give us some background on Bob & Ivan... read on.

"'Bob and Ivan' was conceived in a sleeping car of an Amtrak train heading to San Francisco from Santa Barbara on a rainy December evening. The concept of a regular guy struggling with his nasty parasitic twin emerged from Phil Witte’s subconscious, tweaked by a memory of a 'Ripley’s Believe or Not' illustration of a man, possibly from India, from whose stomach dangled vestigial arms and a torso. It was a grotesque image. Yet, the man was smiling. He seemed to be a man of good humor, not at all bothered by this mass of half-formed protoplasm spilling from his person.

"Later, while perusing a book about freaks, Phil saw a Victorian era photograph of a man and his parasitic twin, possibly the same couple that Ripley had chronicled. The accompanying text suggested that the man found his twin thing amusing, like a puppet. His clothes were neatly tailored to accommodate his twin. He even named the thing.

"A real parasitic twin, unlike conjoined twins, is not a sentient being. With a little stretch of the imagination, it could be. Phil did some preliminary sketches, got his young daughter’s approval, and filed Bob and Ivan away.

"Phil had a collection of cartoons that he started drawing at age eight. He sold his first cartoon when he was 13. Resting on this single laurel, Phil took the next 33 years off to pursue other interests, including kickball, high school, Princeton University, a year teaching English in Bangkok, freelance journalism, writing jokebooks, and getting his law degree from the University of Chicago, before returning to cartooning. He also collaborated as a writer of gags for syndicated cartoonists.

"For 'Bob and Ivan' to work, Phil needed an artist better than he. Enter John Littleboy. John has made his living as a professional artist since graduating from Stanford in the late 1970s. His paintings have been displayed in galleries from New York to Morocco. Phil and John became friends after Phil represented John successfully in a lawsuit involving one of his commissioned paintings.

"Phil gave John a basic sense of the characters, wrote the dialogue and made suggestions, but the images are the product of John’s imagination. 'John added a lot of artistic detail that I would not have even thought of,' Phil said. One practical problem was depicting two characters interacting when one is always directly below the other.

"Funny/creepy art is something John has perfected. His 'Bag of Bones' playing cards depict comically horrifying images, but nothing that would scare a child of normal sensibilities. Kids seem to like the look of 'Bob and Ivan.' But then, kids like freaky stuff.

"Bob is insecure and knows it. Ivan masks his insecurities in a show of braggadocio, would-be womanizing, and sarcasm. Of course, Bob and Ivan might actually be the same person.

"Emily is the attractive woman that Bob longs for. She’s blind, but probably has the situation figured out. Ivan resents her and wants Bob to himself. Their mother inexplicably favors Ivan over Bob.

"Life is complicated. Families are odd. 'Bob and Ivan' is, in that sense, normal."