Catalog / 2022 Releases / Radical: My Year with a Socialist Senator 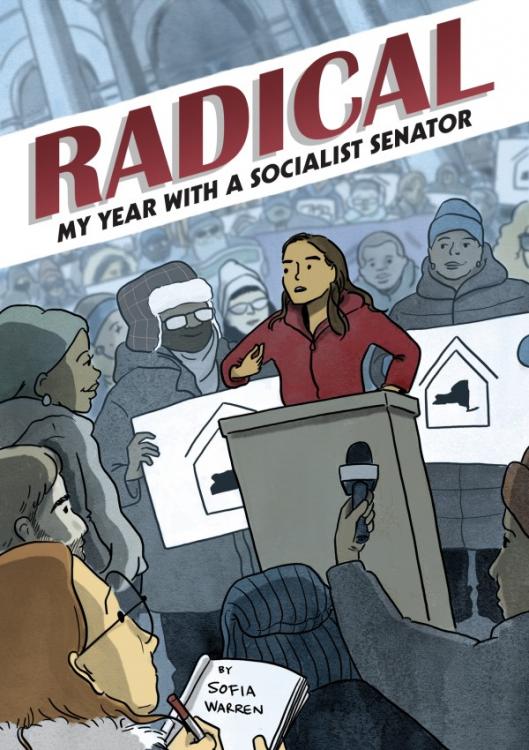 “What kind of politico embeds a cartoonist in her office for a year? Well, a remarkably savvy one, it turns out, and the payoff is Sofia Warren’s beautifully-rendered account of a rookie’s initiation into state politics: an exhilarating baptism of fire, and a sorely-needed love letter to the power of public service.” —Garry Trudeau, creator of Doonesbury

“I learned more about politics from Sofia Warren’s brilliant graphic novel than from the 30,000 hours of political podcasts I listen to every week.” —Jesse Eisenberg, Academy Award nominee

“Radical taught me more about the reality of political activity in our country, with its daily battles and soaring hopes, than my entire education.” —Amy Kurzweil, author of Flying Couch: A Graphic Memoir

“Sofia Warren’s sweetness and wit make Radical an excellent introduction to the oft-overlooked workings of state government, and the lovable weirdos who seek to transform it to make life better for ordinary people.” —David Oks, co-founder of the Gravel Institute

“I devoured this book; I could not put it down. Sofia Warren expertly and effortlessly weaves together the personal and the political. With humor and charm, Radical pulls you in close and gets behind the scenes. Don’t be surprised if you fall in love with it.” —Sophie Lucido Johnson, author of Many Love

In early 2018, cartoonist Sofia Warren was not paying attention to New York state politics. But that summer, her Brooklyn neighborhood began buzzing about Julia Salazar, a 27-year-old democratic socialist running for State Senate whose grassroots campaign was inspiring an army of volunteers. When they beat the odds and won, Warren found herself wondering what would happen next. How does it work when an outsider who runs on revolutionary change has to actually do the job? So she decided to find out.

Radical: My Year with a Socialist Senator is a remarkable graphic memoir of Warren’s experience embedded with Julia Salazar and her staff during their first year in office. From candid conversations and eyewitness experiences, Warren builds a gripping and intimate portrait of a scrappy team of community organizers battling entrenched power structures, particularly to advance Julia’s marquee issue: housing rights.

At every key point during the year — setting up an office, navigating insider politics, public pushback, testy staff meetings, emotional speeches, protest marches, setbacks, and victories — Warren is up close and personal with Julia and her team, observing, questioning, and drawing, as they try to translate their ideals into concrete legislation.

Along the way, Warren works toward answers to deeper questions: what makes a good leader? What does it mean to be a part of a community? Can democracy work? How can everyday people make change happen?