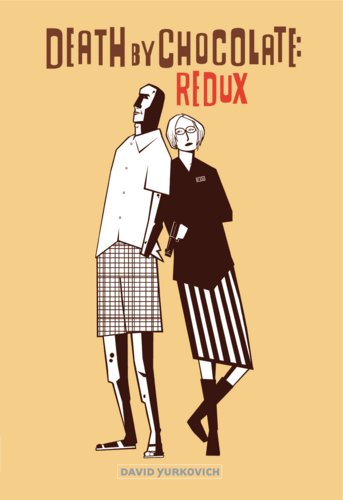 "There are readers out there who are searching from something different in their superhero comics. They read Hellboy and The League of Extraordinary Gentlemen, and they probably like The Surrogates (also from Top Shelf). Well, this is for them." --Leroy Douresseaux, Comic Book Bin

"FOR FANS OF... Film noir; dark chocolate. DOES IT DELIVER? It delivers so copiously that, if anything, you'll go into sugar shock." --Ken Tucker, Entertainment Weekly

Agent Swete -- an unlikely hero comprised of organic chocolate and a member of the FBI's Food Crimes Division -- and his sharp-tongued partner, Anderson, investigate a series of bizarre, food-inspired crimes. Along they way they encounter a variety of characters including an extraterrestrial canine named Geoffrey, writer Ernest Hemingway, an organized crime lord intent upon finding the life-enabling 'eternity pasta,' and an eerie, all-devouring trio known as The Metabolators. This collection includes the Xeric-grant awarded origin tale of Agent Swete, a never-before published Death By Chocolate tale, and an essay by Yurkovich on the creation of the series. Every page has been reworked by Yurkovich, making Redux the definitive edition of these stories. -- 120 pages, Diamond: APR074010