Emerald City Con beckons... And this is just the beginning of my crazy April, over the course of which i'll be in Seattle (Emerald City), White Junction, VT (Center for Cartoon Studies), back home for Stumptown Comics Fest, and then to Sweden for the Kulturhuset comics festival. Yee ha!

Anyway, this weekend in Seattle, James Kochalka will be on hand, singing copies of his new Johnny Boo: Twinkle Power. He'll also be bringing painting and CDs, as well as his son Eli's crazy minicomics.

Nate Powell is coming too, and will have his mini-comic Cakewalk, as well as his collection of older work called Sounds of Your Name on hand. Plus music and posters. (Oh, and of course, his L.A. Times Book Award-nominated Swallow Me Whole.)

Matt Kindt rounds out the party, with lots of fun stuff for sale, including original art, cyanide capsules and secret-code puzzles.

• Partied hard last night with Sarah-Grace McCandless and Jamie Rich. (Thanks for the cocktails, Sarah-Grace!) Jamire and i were talking about film noir, of course, and he told me about these two bitchin' pieces of art, commissioned by Ian Shaughnessy (writer of Shenanigans and co-writer of Strangetown for Oni) for a Billy Wilder sketchbook. Here they are. 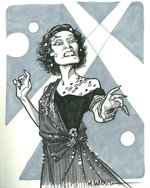 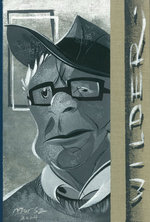 • Here is a stunning piece or work by Aaron Renier, for a recent issue of Portland's Willamette Week weekly newspaper. (About legislation to ban exotic pets.) 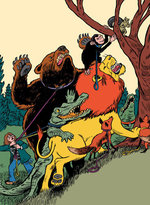 • Christine Foye sent me this terrific link to an Onion article.... ha! "So say we all, Barack!"

• This just in... Jeffrey Brown's cover for Sulk volume 3: The Kind of Strength That Comes From Madness. 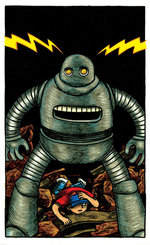 Sulk (Vol 3): The Kind of Strength That Comes From Madness explores the world of fantasy and science fiction, and turns it on its head. Or rather, just kind of tilts it slightly to the side. Stories include "Being Awesome Is Its Own Reward," where two brothers deal with a giant monster rampaging through their city, and "Mighty Malcum," in which an 11 year old genius and his robot best friend attempt to adjust to college life. There's also stories of pirates, time travelling babies, martial arts masterminds and an all new short story from Elfworld.

• NOT comics. A fat slice of a wake up call, by Chris Hedges: America Is in Need of a Moral Bailout.