Alex Robinson has a short interview at Spike.

Tonight:
"A Day of the Dead art celebration with local artist Farel Dalrymple and Seattle artist Kazimir Strzepek. Farel made a big splash in the indy comics scene with his debut Pop Gun War and his acclaimed Meathaus anthologies. Last month he made his Marvel comics debut with Omega the Unknown written by novelist Jonthan Lethem. Kazimir is a relative newcomer to the indy comics world, but his debut The Mourning Star won an Ignatz award for Outstanding Series!"

Floating World proprietor Jason Leivian writes:
"The first comic I ever read was ROM Spaceknight, a silver cyborg fighting evil monsters throughout the universe. I collected every issue until the series was cancelled at #75 (when I asked the comic clerk why it was cancelled he kindly replied, 'Well, they just ran out of stories to tell.'). I didn’t know it at the time, but the artist of that first issue was Steve Ditko, who would later become one of my all time favorites.

"Years later I learned that all of these incredible stories were written by one man, Bill Mantlo. At the same time I learned that he had been injured in a terrible hit and run accident in 1992. Due to the severe injuries, Bill currently resides in a Brain Injury Rehabilitation Nursing Home, and will probably do so for the rest of his life.

"This show will serve as a fundraiser and celebration of the stories Bill has given us. All of the artwork and more will be compiled in a tribute comic next year that will be sold as a non-profitbenefit book for Bill’s brother/caregiver, Mike Mantlo, to provide funding to enable Bill to enjoy somewhat of a quality of life." 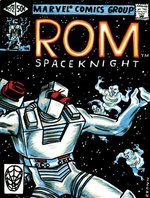 • Here's a cover in progress, for Nate Powell's forthcoming Swallow Me Whole. Dig! 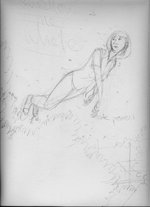 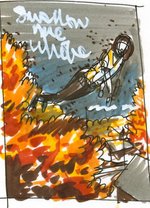