SPX 2007 is come and gone now and it was fun fun fun. I've been attending this show since 1996, when David Lasky and myself were the only attendees from the West Coast. There are plenty of anecdotes about how awesome it was in the olden days, when Chris Oarr buried a pig in his backyard and we drunkenly swung at a pinata (this is the same house party at which i met for the first time folks like Greg Bennett of Big Planet Comics, Jeff Smith, and Shannon Wheeler), then into the years where attendance rose and Sunday became a giant picnic. When the show relocated last year i was one of those who bemoaned the lack of Sunday in the September sun... time to kick back reflect with ones peers and what have you. Well now that the show has moved to October, the weather isn't as nice, and besides which, the new hotel is so vast and comfortable, that i didn't really miss the picnic so much. Life is all about change, yes?

Check out this fun little SPX interview with Chris Staros by Scott Rosenberg and Christopher Porter at Read Express.

• Lots of stuff read from the show while traveling back home. This is only a smattering. I also have some photos i took, but i still need to load them.

• While i don't think there was a single "buzz book" that stood out from the crowd, i was given a handful of minis by a creator i might dub the "buzz cartoonist" of the show, at least for me since i'm not familiar with his work. I don't recall meeting him, but i ended up with a handful of mini-comics by self-publisher Joseph Lambert. His art and stories are wide-ranging in style, but man can this guy draw! My favorite was hands down a mini called Turtle Keep it Real. The other books were Thin Bear Loves His Brother and The Bait & Switch. Wonderful stuff. 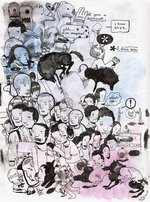 • Our own Rob Venditti continues to surprise with a prose chapbook titled Dads, also published by Wide Awake Press. This is a short and delightfully fictional account about growing up and the differences between a "real" dad and a "step-dad." Insightful and extremely well written. Visit the Wide Awake Press website and buy this now, please.

• The anthology Eats is the third and final entry from Wide Awake Press. It's not as good as their previous anthology 666, but it has a couple nuggets of greatness making it fully worth your while. With an (obvious) food theme, Ben Towle's Hush Puppies story was terrific. Rob Ullman privided a nifty story called "Crustacean Frustration" which, besides being a heartwarming tale of forgiveness and redemption, is a real fun cartoony departure from his more well-known proclivity towards drawing smoking hot young women (see below). Big ups to J. Chris Campbell. (Who, by the way received the award for seeming even as remotely drunk as i was on Friday night. Good god, i suffered a two-day hangover after that bender.) 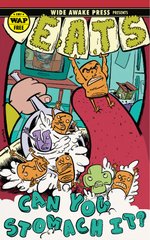 Illustration below by Rob Ullman 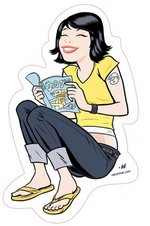 • After gearing many good things i finally kicked down some cash at the CCS booth for Ken Dahl's two issue of his series called Monsters, a (loosely?) autobiographical story about contracting herpes. It doesn't sound like it could possibly be one of my favorite books of the year, just from this description, but it's fucking amazing. I'm hooked... can't wait for the next issue! I couldn't find a website for him, but he has a section at I Know Joe Kimple. 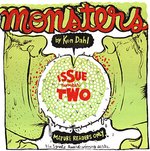 • Aaron Renier returns to comics, taking a break from his kid's book, and gives us the first chapter in a riveting detective thriller The Karaoke Encryption. A story about a tomato gumshoe named Thomas "Guns" Atillo (aka tomatillo!!), this little gem is as layered and textured as Spiral-Bound, his Top Shelf masterpiece. An amazing little comic... More! More! More!

• Next up, another comics narrative by a young Jewish cartoonist looking to return to their roots. Sarah Glidden handed me issue #1 of her ongoing story "How to Understand Israel in Sixty Days or Less," and i must say it's a fine effort. Her art style is loose and expressive while maintaining a balanced realism that helps the somewhat intense subject matter. Nice work. I hope she finishes this and finds a publisher for it. We need more stuff like this in the marketplace.

• Drew Weing brings his magic touch to the Fluke 2007 anthology, proving that not only is he one of the most imaginative cartoonists in recent years, but his eye for bring other high-level creators into the mix is also genius. Since this is "just" a convention-based comic it's likely that this superb anthology will be over-looked, which is criminal. Stand-outs include contributions by Shawn Cheng, Patrick Dean, Joseph Lambert (THAT guy again!), Mike Laughead, Dorothy Gambrell, Joey Weiser, Eleanor Davis (of course), Ben Constantine, Matt Wiegle, Michele Chidester, and Chris Wright. The ace in the hole goes, not surprisingly, to Drew himself with the magnificent "Algernon Lamb: Aesthetic Detective," a tight little masterpiece... in fact, i officially nominate this for Best Short Story of 2007, it's that well crafted.

If you like a good indy anthology comic, this is really as good as it gets. 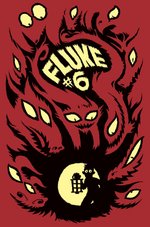 • James Hindle keeps making great little mini-comics, and they get better every time. He gave me a copy of Folded Paper Assembly #3 and i loved it, especially the lead story "Broken Necks." Like a fun mix of Steven (Ribs!) Weissman and early-era Adrian Tomine. I'm really enjoying James' comics more and more.

• Mr Phil of the incredible Indie Spinner Rack was on hand pimping the debut volume of the awesome anthology Awesome, edited and produced by Mr Phil and his cohort Charlito. Chock full of great comics, it was notable for me particularly for introducing me to excellent new talent (for me at least) like Alexis Frederick-Frost and Phil Jackson. Oh, and there's ANOTHER super rad comic in there by Joseph Lambert. Awesome. 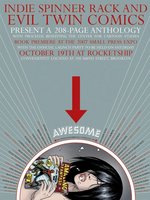 • Monster Island Three, edited by Billy Mavreas jumped out at me from Bodega's table. In the art-zinecamp, this artsy fartsy book from Conundrum Press is a fine edition to a welcome new category. It's not perfect but it has a ton of great art and a sweet essay, "In Defense of our Galaxy: On the publishing history of Jack Kirby's Captain Victory and the Galactic Rangers," AND a new comic by Bernie Mireault (who also has a new strip in the aforementioned Awesome anthology).

• Steve Hamaker kindly gave me his last copy of the new Shazam!: the Monster Society of Evil hardcover, written and drawn by Jeff Smith and colored by Steve himself. Wow! A choice entry in the much underrepresented all-ages category (especially from Marvel and DC), this is the first comic from one of the Big Two i've read in years, where i felt a reader didn't need a masters degree in mainstream continuity to enjoy it. A perfect example of how the big publishers can and should be making comics, if they ever hope to have a chance in hell in finding and developing new young readers. More please.

(Steve, i really owe you one. And thanks for the props on your own blog, eh?) 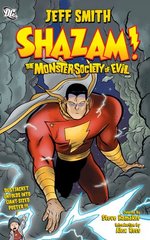 • My favorite book of the trip probably wouldn't even register to most comics readers here in the ol' U.S. A retrospective of the life and output of the highly regarded French publisher Editions Cornelius. Focused more on the art than the history, Cornelius: ou l'art de la mouscaille et du pinaillage is the sort of dreamy book that makes my heart all aflutter. The only similar book i can think of in this category is the also wonderful book, 25 Years of Kitchen Sink, which came out a long time ago.

Cornelius publishes some of the world's greatest authors, and has published the definitive editions of David Mazzuchelli's ground-breaking stories from the seminal three volume Rubber Blanket series. And to prove how great publishing minds think alike, compare the gorgeous Crumb cover to this crazy cool tome, to our own Seasonal Sampler, art directed by myself and drawn by Jeffrey Brown. I swear on my Mom's grave i never saw this before we completed the Sampler. 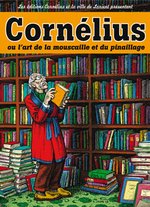 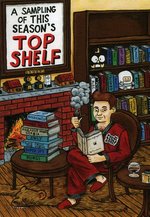