Hey Bartender / in between days

Home late last night from Emerald City Con in Seattle and home for three days before i hit the road again for San Francisco and the Alternative Press Expo.

Left Portland early on Friday. My co-pilot, Bwana (Pencil Fight) Spoons, who has been on more road trips with me than anyone, ever. Bwana is an incredible painter, zine-maker, cartoonist, publisher, and just all around cool cat. Check out his goods at the tres chic Grass Hut Corps.

The sun was out, so the drive was smooth. Seattle was gorgeous. (Seattle is fun when it's murky and damp, which is most of the time. But when it's sunny, it's absolutely one of the most beautiful cities around.) First stop Zanadu comics, downtown, so i could deliver a small re-order. Zanadu (which has a second location in the U. District), is an amazing pair of stores. Incredible overall range of books …Â almost exclusively books, with only the most recent floppies … where i'm always guaranteed to find some rare funky book i've been looking for.

Another incredible store in the U. District, is Comics Dungeon. It's a little dingier and low-fi, but just as full to brimming with comics goodness. Check 'em out if you're ever in the Emerald City... but make sure you allocate at least an hour, because there's so much to take in. 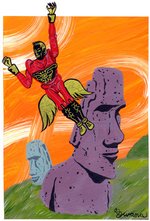 Next in our downtown leg, a brief visit to three trippy little shops in a row, right next to the Moore Hotel, Fancy (which sells jewelry), Schmancy (toys), and Pants (ladies undergarments and accessories). Lots of nifty hand-made items, and nifty retail spaces in themselves. 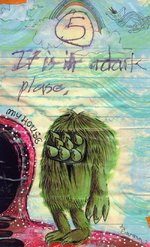 After a quick bite, Bwana and i headed over to the football stadium and got our table set up. And i'm a dumb-ass, because now that i'm blogging, i should be taking the digital camera for snap-shots. 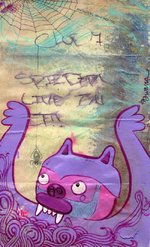 Finally, Bwana left to go stay with Shawn Wolfe (yes, the smoking hot designer), while i went to spend some Q.T. with my old pal Dave (who was on the crew team with me back in college), and his delightful family, Julie, Aiden and Angus. (The boys are a kick, and attended their first comics convention this weekend, costumes and all.)

Saturday, the show itself started out gang-busters. There was a giant line snaking around the building to start, which always bodes well. The mood was generally good, and the sales, while not brisk per se, were steady... until about 3:00 p.m. or so. (Which was, coincidentally, the same time as tip-off for game one of the Final Four games.) But overall, decent first day.

That night, however, was one for the ages. Off to Pike Street Brewery for dinner with Garret Izumi, Scott Mills, and my old intern (and current freelancer) Carlos. Sure, Pike Street is a little lacking in charm, but their beer is outstanding, as was the heaping pile of nachos i consumed. Plus, we got to catch the second half of the UCLA game, as they stomped on LSU. (Only to get crushed just tonight in the finals, by Florida.)

Stumbling out of the restaurant and into Post Alley (a freaking awesome cobblestone alley which reminded me of old European streets), we immediately ran across a true spectacle, which i christened The Gum Wall. Like a veritable rainbow, literally thousands of wads of gum were plastered over about a ten foot square section of the alley wall. It seemed like a good omen, so we stopped for a "break."

At which point we noticed a darkened, inconspicuous doorway, with a sign which read The Alibi Room. We said what the hell, and went in for a peek. Wow, what a slick little restaurant/club this was. The decor was something right out of a New York Style magazine, but the clientele was just regular folks. Even the Pretty People seemed down to earth, and without raging egos. We drank scotch, and it was good. Recommended.

After that, Garret and Scott split back to their hotel, while Carlos and myself trekked around a break in, and then back into in Post Alley again (where the Pike Place Market stands), and into yet another magical little place called The White Horse. Met up with some pals at Image, Joe and Eric (Stephenson), comics super-star Rick Remender, and his lovely wife Dani. I also met the very friendly and unbelievably talented Luna Bros. Really really nice guys. The clientele here was decidedly more "sophisticated" seeming, the small room surrounded by dusty books, and the bar menu with only a small handful of bottled beers and a few wines by the glass. Being more of a draft beer guy myself, i chose an interesting sounding beer, and... fell in love. Some kind of Scottish heather ale. Big full nose, and a soft, malty-sweet roundness that tasted simply divine. I wanted to stay for another, but this was our night to "leap forward" into daylight savings time …Â i would be losing an hour of sleep. Not wanting to work the show the next morning with a raging hangover, i decided that discretion was the bettor part of party valor here, and went back to Dave's for the night.

And speaking of, it's already after 2:00 a.m. now... so to make a longer story much shorter. The show on Sunday was a bit slower. The sun was out, and when the sun comes out during early Spring in Seattle, people tend to opt for sunshine. Got to catch up a wee bit with various peeps. Bob Schreck, Matt Wagner, Diana Schutz, Scott Allie, the Image crew, Jason Hall, David Lasky, Gary Groth, Eric Reynolds, and Zuniga & Jen from Fantagraphics.

Also, salivated over a super-rare hardcover edition of Dan Clowse' masterpiece collection called Pussey!, culled from his brilliant Eightball comic book. This is the only book i don't of his oeuvre, most of which i have in their hardcover editions. Alas, this baby was priced at $200. A little too rich for my blood. (I do belive Eric told me that Fanta is planning on a new softcover reprint later this year. This material is funny-as-shit, and come recommended.

The show ends, Bwana and myself grab a bite at a tasty pan-Asian place, and head back to P-Town. To wrap, the consensus amongst those i polled is that Emerald City has great vibe, gets good guest, and yet still has room to improve. Certainly, with such a low overhead for myself to attend, it's a gimme. Thanks to Jim Demonakos, and the rest of those who make this show one of the good guys.