US Congressman and civil rights icon John Lewis made history with the release of March: Book One, his award-winning and #1 bestselling graphic novel memoir co-written with Andrew Aydin and drawn by Nate Powell. Aside from the unprecedented factor of such a major figure using the graphic novel format, the book has been embraced as both a true work of literature and also a much-needed tool for reaching new generations with the history and lessons of the civil rights movement. 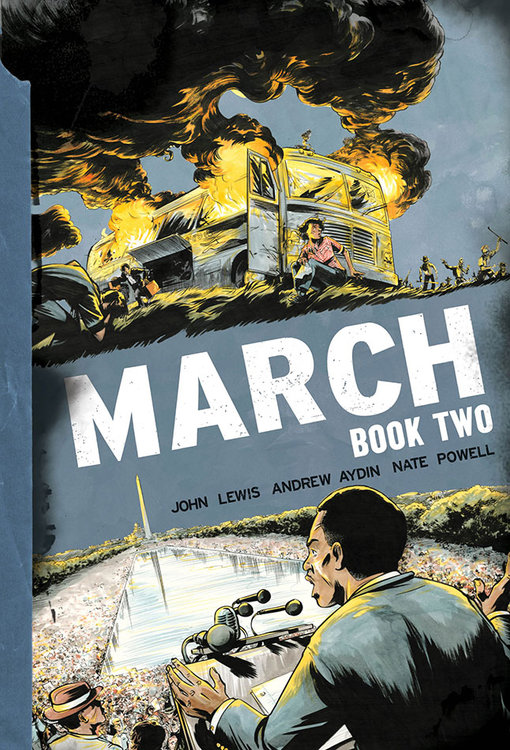 Today, for the first time, we're revealing the gorgeous cover design of March: Book Two, the much-anticipated second part of the March trilogy. It's scheduled for release in early 2015, so we're still half a year away — but the interest in this title is so tremendous that we wanted to showcase something special now, as we head into Comic-Con next week.

Book Two will be significantly longer than Book One, taking a step forward into the tumultuous events of 1961-1963 while continuing the framing narrative of President Barack Obama's inauguration in 2009. Major plot lines include the famous journey of the Freedom Riders, imprisonment at Mississippi's Parchman Penitentiary, and young John Lewis' involvement in helping to plan and lead the legendary 1963 March on Washington.

Nate Powell's powerful cover showcases (on top) the Freedom Riders' bus set on fire by a white supremacist mob in Anniston, AL, May 14, 1961, and (on bottom) Lewis' fiery speech at the March on Washington, August 28, 1963.

As before, we're offering two special editions of March: Book Two exclusively from Top Shelf, in addition to the regular softcover — there is a hardcover edition as well as a limited edition signed & numbered hardcover.

Please join us in celebrating this first look at the next step in the record-breaking March project! Book One continues to rack up awards and honors, has been adopted by schools in 30 states, and is currently being read by 15,000 incoming freshmen at 3 major universities, so the journey of this project is truly just beginning.