News / An army of critics agree: Nate Powell's ANY EMPIRE is stunning!

An army of critics agree: Nate Powell's ANY EMPIRE is stunning! 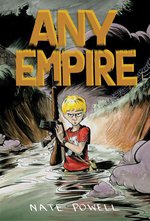 As our huge new releases percolate out into the world, critical reviews continue to roll in -- and readers of all kinds are reporting that Nate Powell's Any Empire is blowing their minds!

Of course, after Nate's Eisner Award victory for Swallow Me Whole, expectations were high... but take a look at these responses:

"Nate Powell's new graphic novel is a heartbreaker--a gently paced, not-particularly-realism-bound story about how kids' fantasy lives (and the cheap entertainment that fuels them) can shape their real lives, and ultimately ruin them. Great stuff." -- Douglas Wolk, ComicsAlliance

"It's a book not so much about children, but about adults trying to figure out how they ended up they way they did and where it all began: the culmination of things that meant the most in a time when we felt things deepest, the effects of story on malleable minds." -- Hayley Campbell, The Comics Journal

"A complex knot of a book... Powell embeds his drawings with stunning narrative precision... A frictionless read that is pregnant with dense possibilities." -- Rob Vollmar, LitStack

"A wonderful graphic novel... Powell perfectly captures the lazy summers of adolescence familiar to all of us and it demands repeated reading to get the many subtle nuances of the story." -- Trent Shaw, PartnersWest

"Powell's brilliance here is that he manages to create a story that is ultimately a fantasy, but one that is realistic enough that it draws the reader in to the narrative and shows exactly where the reader fits in." -- Matthew Meylikhov, Multiversity Comics

"A story that is both intimately introspective and broadly reflective of our culture -- Powell is careful not to point a critical finger at American attitudes toward violence without revealing his own history and relationship to the same." -- Mark Barnes, All Caps Comix

"An incredible book ... Powell continues to show himself a creator who is absolutely worth paying attention to and Any Empire may even be better than Swallow Me Whole, which was sublime." -- Seth T. Hahne, Good Ok Bad