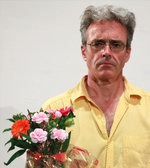 Two global comic-book celebrities are teaming up for a one-of-a-kind live performance at the Sydney Opera House in Australia! Our own Eddie Campbell (The Playwright, Alec, From Hell) has created a series of illustrations for a live reading of a new story by Neil Gaiman (The Graveyard Book, Coraline, Stardust, The Sandman), with live music by the electric rock & roll string quartet FourPlay. Eddie and Neil will also appear on a panel the next afternoon with Shaun Tan (The Arrival) discussing creativity and collaboration. It's all part of a weekend festival running August 7-8 called GRAPHIC, which also includes a talk by Kevin Smith, a screening of Akira, and more. For details, click here!