News / Alex Robinson is never TOO COOL for a Harvey Award! 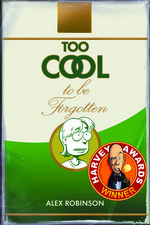