I can smell it outside as the plum trees on my street flood my olfactory senses. Oh baby, i can't wait for some warm weather again.

Pat writes, "Unbelievably, I WON, in the category of illustration, and then later that night the big one, the coveted GOLDEN TOONIE, reserved for giants like Berkeley Breathed, Lynne Johnston, Peter Bagge and Jim Woodring. 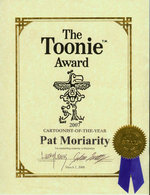 "I believe that all cartoonists crave affirmation, especially from their peers, and I'm no different. So if you are a cartoonist who happened to vote for me, thanks."

And speaking of Jeffrey Brown, here's a design he made for the character Microwave, from the series of Incredible Change-Bots toys coming out from Devil's Due.

And finally, some sketchbook pages from Jeffrey's Sulk series, which start hitting stores the Fall.
page of deciding how to draw the character ‘rabasaku’

page of random sketches getting into the spirit of the book

early sketches for the character ‘eldark’

adjusted script for last part of book.(note: I erased the script lines for the section of pages showing how the fight ends...)

• Some Renee French tasty goodness. First, a random image that showed up in my inbox. No explanation given. None needed. Wow. 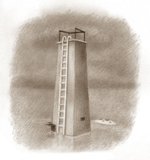 And here is Renee's first draft of the Soap Lady reprint we'll be releasing early in 2009!

• Ian Lynam (who laid out the Peanuts Tribute section in Top Shelf Asks the Big Questions, and is the designer on the forthcoming Top Shelf art book by Bwana Spoons, titled Welcome to Forest Island), has been working on a coffee table art book, titled Parallel Strokes, for six years. It's now available, and comes highly recommended. Ian is a world-class designer, as well as one of the brightest intellects on art, typography and design i've ever had the pleasure to know. 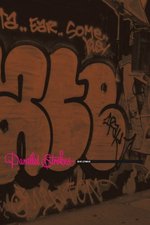 "Parallel Strokes is a collection of interviews with twenty-plus contemporary typeface designers, graffiti writers, and lettering artists around the world. The book is introduced with a comprehensive essay charting the history of graffiti, its relation to type design, and how the two practices relate in the wider context of lettering.

• LOCALS ONLY! If you're in Portland tomorrow nighth (Thursday), check these out! Lots of great events.

First Thursday, March 6, 6:00 p.m. All clocks will be working, unless they are broken.

The ArtBar and Bistro inside the Antoinette Hatfield Hall. 1111 SW Broadway at Main St. Portland, OR. 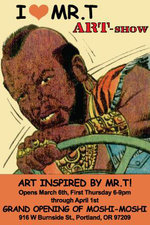 A lot of great people are contributing pieces and a portion of the proceeds will go the Opal Creek Scholarship fund for Buckman Elementary School. This is so some kids that may not otherwise be able to afford it can go on a great field trip to Opal Creek and have a great time while learning something worthwhile.