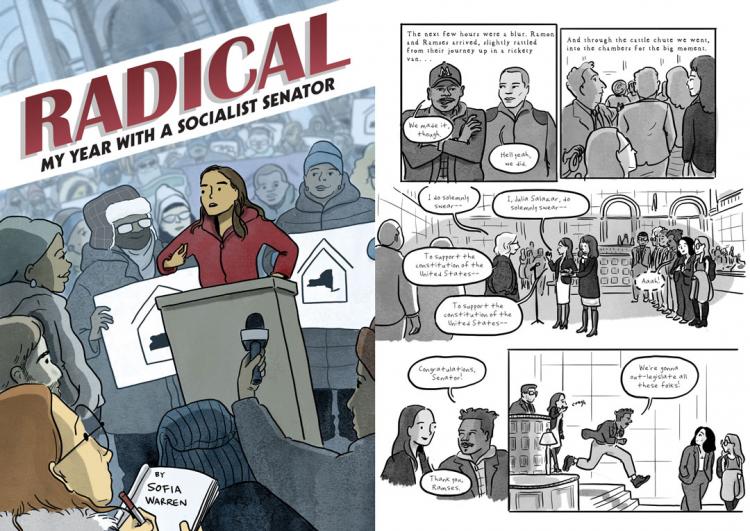 All these themes will be explored — with nuance, compassion, and humor — next June in Sofia Warren's remarkable debut.

"So much of this experience was a surprise to me," says Warren: "that for their entire first legislative session, Julia and her staff let me be in the room; that 'the room' was just as often a food court, or a senior center, or a march in the middle of a blizzard; that they were as open with me about their frustrations as they were about their victories; and that I — an introverted, cynical millennial living through the Trump presidency — could leave the experience so motivated and inspired. I hope that readers leave this book feeling the same."

"After seeing firsthand how the award-winning graphic memoirs March and They Called Us Enemy have transformed countless readers' understanding of essential issues, we can't wait to bring Sofia's book into the world," says editor Leigh Walton. "Why do elected officials act the way they do? Is there any other way? Why are we often disappointed by our governments, and how can we talk so they will listen? Radical, in its charming, accessible style, gives us a rare look behind the curtain, filling in some of these gaps in our understanding and leaving us better equipped to shape the future."

Radical: My Year with a Socialist Senator by Sofia Warren
Coming in June 2022
For more details and pre-order options, visit PenguinRandomHouse.com.