Our hats — and cricket helmets — are off to Julian Hanshaw today, as his charming and moody graphic novel Tim Ginger is announced as a finalist for the Los Angeles Times Book Prize!

Before Julian came to Top Shelf, he had already racked up considerable acclaim (and awards) in his native Britain for works such as The Art of Pho. Now, with Tim Ginger, he blends themes of childlessness and grief with a personal fascination for conspiracy theories, cricket, and the American southwest, resulting in a graphic novel that several critics have named one of the best of 2015. Broken Frontier called it "emotive subject matter tackled with grace and serenity," concluding that "Tim Ginger rewards not just a second reading but a third and a fourth – each revisit adding extra layers to its thematic core, and revealing subtle nuances to the interrelated plot threads that lead in to that final, awe-inspiring revelation."

In celebration, Julian Hanshaw will a featured guest of the LA Times Festival of Books, held April 9 -10, 2016 at the University of Southern California. Winners of the Book Prizes will be announced at the April 9 award ceremony. 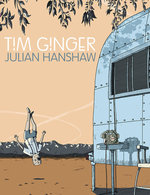