• Some reviews of Ed Piskor's (older, self-published) first couple issues of Wizzywig, which we'll be collecting this Summer. Keep in mind, these are old reviews for only a small fraction of the compete story. This book is gonna blow your minds, kiddies!

From, the Totally Rad Show.

• Here is a sweet sweet process blog by our old friend and comics brain Matt Madden. After almost 15 years at this gig, and lot's of wonderful memories, to this day editing the Top Shelf anthology was my favorite part of the job. 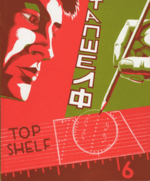 • Emerald City Con was this last weekend, and it was a blast. Kudos to Jim on the crew for another great show. Best part of the show for me was seeing Tom Spurgeon, from the Comics Reporter, who was looking extremely dapper. Plus, he did the best recap of the show to date here.

Oh, and speaking of Jeffrey Brown, i was digging through some old files i had set aside for this very blog, and here are three terrific promotional illustrations Jeff had done for his awesome Incredible Change-Bots books. You know, just because they're cool as hell. 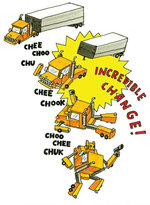 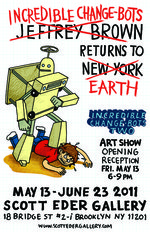 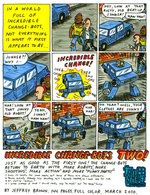 • Nate Powell continues to be one of the hardest working men in comics i've ever known... and he's a new dad! He has a solo exhibit of comic art called CROSS SECTIONS that's going up this week at the Historic Arkansas Museum in Little Rock-- the opening reception is Friday, April 13th from 5-8pm. 53 pieces are represented from 1998-2012, with focus on the graphic novel work of the last five years. All pieces are for sale, as are the books of course, and the show will be up until June. Here's the Facebook event page. And his blog-post about the same.

On Saturday, April 14th from 12-2pm, he'll be signing at The Comic Book Store (9307 Treasure Hill Rd.) in Little Rock, which marks 20 years since they provided shelf space for his very first published comic!

• How cool is it that Chris Staros is now a professor!

• Finally, boy oh boy do i wish i could attend any of these stops on the Caravan of Comics, a U.S. tour by a super-talented gaggle of Aussie cartoonists, including Ben Hutchings, Gregory Mackay, Mandy Ord (all whose work i've been reading and enjoying for over a decade) and Pat Grant, whose book Blue we just helped release in North America.

In April-May of this year a group of Australian comic creators are coming together for a tour of North-Eastern USA and Canada. Encompassing the Museum of Comic and Cartoon Art (MoCCA) in New York, the Toronto Comics Festival (TCAF), the Centre for Cartoon Studies, in Vermont and Quimby's Bookstore in Chicago
Nothing like this has been attempted before by a group of Australian cartoonists, and it could be the furthest a group of cartoonists has ever travelled.