Hey Bartender / i'm not one to bring attention to myself,

i'm not one to bring attention to myself,

but this short film by Sarah Morean at Daily Cross Hatch is pretty awesome. It shows me making a scratch margarita at the Isotope APE After party last weekend. Yummy...

hey, bartender! with Brett Warnock from Sarah Morean on Vimeo.

• Steve Lafler gets the Mixtape Treatment at Inkstuds! 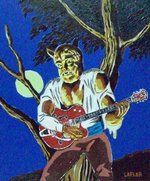 • We asked James Kochalka to write a brief intro to his collected SuperF*ckers, which kicks off our 2010 schedule in the Spring. It's so fucking awesome i just wanted to run it here.

• I don't think Jeremy Eaton sleeps. Or else he's created a clone. He now has a new blog of, as he says "pop-infused psycho-babble," called Popular Madness.

"Popular Madness, appearing every Monday through Friday, will utilize a vast collection of old comic book panels, acting as springboards for my stream-of-consciousness contemplations, ruminations and cultural criticism – all spiked liberally with touchstones from our shared popular culture."

• My neighbor and friend Vanessa Veselka (who also has a cameo in my film Road To Insignificance) is serializing her novel Zazen on the Arthur Magazine website.

From Jay Babcock:
The Story: It’s the very near-future, somewhere in the Pacific Northwest—or a neighborhood near you. 27-year-old Della Mylinek has suffered some kind of breakdown after failing to stop the construction of a local Wal-Mart. In an attempt to regain psychological, financial and emotional stability, she’s moved in with her brother and his pregnant wife and taken a job waiting tables at a vegan restaurant. But her anger remains, and one thing leads to another…

The Author: Vanessa Veselka is a writer and musician living in Portland, Oregon. She has been, at various times, a teenage runaway, a sex-worker, a union organizer, a student of paleontology, an expatriate, an independent record label owner, a train-hopper, a waitress and a mother. Her work has appeared in Bust, Bitch, Maxmum Rock ’n’ Roll, Yeti Magazine and Tin House. Zazen is her first novel.