• Occasional Top Shelf freelancer Chris Ross had this to say, regarding his type decision on our awesome new book Veeps:

Veeps is set in a typeface called Adobe Caslon Pro. From my research, I found that Benjamin Franklin, in addition to being a ladykiller drunk, and perennial not-veep, was a printer. He had two favorite typefaces: Baskerville (http://en.wikipedia.org/wiki/Baskerville), which many typesetters of the day called "illegible" and a typeface called Caslon. And it was Caslon that Franklin chose when he typeset the mass-produced "Declaration of Independence." The unique properties in Veeps are the ligatures, which I've jumped up to eleven to reach for the hyperbolic nature of the text. It's noticeable as being archaic and boosie, but once you finish the introduction, you definitely get in on the joke. This specific typeface, Adobe Caslon Pro, is the closest and most complete recreation of the typeface that I could find. When I read Bill's words, and saw Wayne's portraits, and saw what Brett had in mind with the decorative elements, this whimsical voice of you three (plus the specter of Staros) came out, Borg-like. It sounded like Caslon.

• Speaking of Veeps, check out this extensive interview with Bill and Wayne by Tim O'Shea. 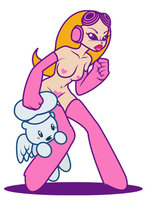