Drove a couple hours south to Eugene yesterday (with a dislocated rib burning in my back, no less), to see a lecture by Art Spiegelman, for the University of Oregon's Comparative Lit program, and needless to say, i was blown away. This Standing in the Shadow of No Towers / Comics History gig isn't anything people haven't been reading about for years, and i'm presuming this was a variation on the lecture he's given maybe a hundred times … considering the ease and wit with which he spoke … but the timing couldn't have been better, since he included as well a slideshow of, and a fabulous context for, the current and raging Danish cartoons controversy.

As he pointed out, there's been NOTHING reprinted here in the American (print) media, although it's not too hard to find them surfing around the web a bit. Heretofore i'd seen not a single of these twelve incendiary images. Art filled in so much background into this stunning development (right-leaning editors wanting to intentionally incite a negative response by the nation's Islamic population), that i now have a much greater appreciation for this whole affair, and its developing implications. It sure would suck to have a price on one's head by some angry fundamentalists.

I just checked out Tom Spurgeon's Comics Reporter, and he does indeed have a link to these cartoons.

(As an aside, he also described a similar controversy which happened in the U.S. about a hundred years ago, in which a dispute about political caricatures resulted in proposed …Â and failed …Â legislation that would BAN all political cartoons which casted a bad light on the politico in question, punishable by a year or two in prison, and a $1,000 fine. Wow. And the really crazy thing is how much the climate is tilting that direction again now.)

Art also showcased three cartoons which he banged out last week, just in time to appear in the current issue of the New Yorker* (Feb 27, 2002, cover title "Watch Your Back Mountain" starring Dick & W.). Said cartoons being Art's impulsive response to Iran's "Anti-Semitic Cartoon Contest." (All three using different technique and tones.) This is not a joke. But cooler still, he showed us an as-yet unpublished cartoon that he'd drawn less than a day later (but past the deadline), which responds to what he'd been told was an even more restricting edict for the contest; that the cartoon needed ALSO to refute the existence of the Holocaust.

This sublime full-page piece viewed from a perspective from inside one of the infamous concentration camps, piles of bodies everywhere, shows and a single man amongst many downtrodden prisoners lining up to the gas-chamber, a smile beaming from his happy face, saying something to the effect that, he's not worried, since this isn't "really" happening. Brutal freaking image. I think Art said this will be running in the Nation perhaps? (But don't hold me to it.)

Lastly, peppered throughout the presentation were snippets of Art's autobiographical, comics-form introduction to a forthcoming collection of his long out-of-print Breakdowns material. Can't wait for this!!

I've had so much respect for what he's done over the years (going WAAY back to my love of Wacky Packages), and while i knew that he was a respected comics historian, i was not prepared for such a truly dazzling intellect, nor did i suspect he'd be a real, charming, laid back guy. (I'll admit i was expecting more of the neurotic New York persona he can make himself out to be in his cartoons.) 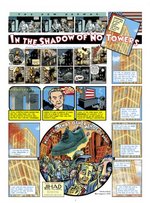 * (This new issue of the New Yorker also has a gorgeous full-page cartoon by none other than the revered Dutch cartoonist Joost Swarte.)

And on a totally different note, the new issue of Mass Appeal i recently picked up, has a tastefully laid out interview with the legendary Dan Clowes. Always nice to see comics bridging over into the mainstream.

Lastly, sad to see another one bite the dust. R.I.P. Speakeasy Comics. There's not much more i can add to this post-mortem, really, so i won't.