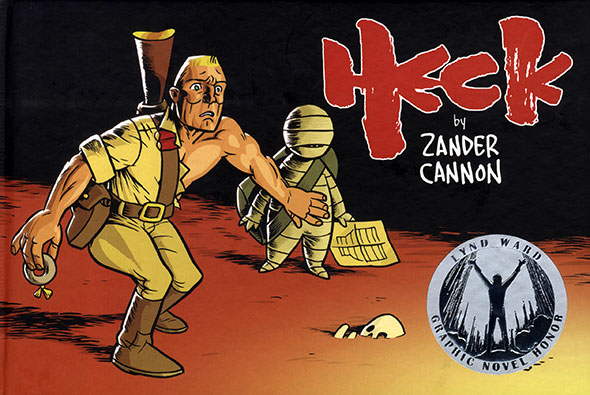 Hot on the heels of his Eisner Award nomination, more congratulations are in order for Zander Cannon tonight, as the Pennsylvania Center for the Book named his graphic novel Heck among the recipients of the Lynd Ward Prize, a recent and very prestigious award honoring "the best graphic novel, fiction or non-fiction, published in the previous calendar year by a living U.S. or Canadian citizen or resident." Heck is one of two Honorees, along with Gene Luen Yang's Boxers & Saints, while the top prize went to Jim Woodring's Fran. Indeed, when informed of the news, Zander had this to say: "This is such an honor. I'm also friends with Jim Woodring and Gene Yang, so the happiness is threefold!"

The judges called Heck "a thoroughly engaging story despite its seemingly simple presentation. It draws its intellectual inheritance from Dante’s Inferno to explore memory, amnesia and morality with grace and wit. Cannon’s style is characterized by deft and confident thick line work combined with dark shadows, creating a stark black and white affair that hides nothing."

Heck, first serialized in the digital magazine Double Barrel, is Zander Cannon's first solo graphic novel, though it follows two decades of acclaimed work in the industry as both artist and writer/artist. Combining the thrills and action of the pulp tradition with the trademark emotional sophistication of indie comics, Heck follows a washed-up football star as he discovers a portal to Hell, goes into business as an underworld courier, and battles dark forces both within and without. It's available in the pages of Double Barrel, as an ebook or hardcover, and exclusively from Top Shelf as a limited-edition signed and numbered deluxe package.

Our heartiest congratulations to Zander and all this year's Lynd Ward Prize recipients!