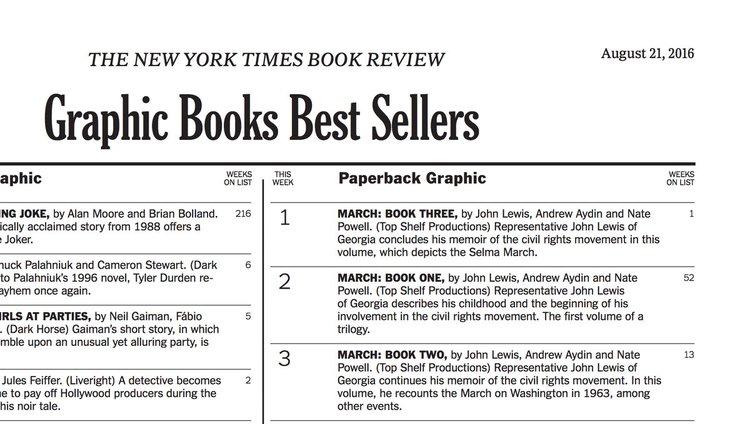 Congratulations are in order for Congressman John Lewis, Andrew Aydin, and Nate Powell. Their award-winning March trilogy has struck another milestone, as March: Book Three makes its debut appearance on the New York Times Bestseller List at #1.

In fact, the entire trilogy takes the top three slots, while March: Book One celebrates a full year of Bestseller status with its 52nd week on the charts, coming full circle from its own #1 debut.

In the wake of Book Three's release, demand for March has been staggering, selling out multiple printings. For several days in a row, each of the three volumes of March outsold every other book in America aside from J.K. Rowling's new Harry Potter adventure.

This triple-bestseller status is only the latest in a string of recent honors for March, the three-volume graphic novel memoir which brings the history of the civil rights movement to urgent new life through the eyes of John Lewis. In May, the nation's largest public school system, New York City Schools, announced the addition of March to their official "Passport to Social Studies" curriculum. A few weeks ago at Comic-Con, the authors accepted an Eisner Award (often called "the Oscars of comics") and led a commemorative "children's march" joined by hundreds of students and readers, with Congressman Lewis in "cosplay" as his younger self complete with trench coat and backpack. A recent New York Times article profiled the series' phenomenal success and its real-world impact on students across the country — including young activists who are being inspired by March to take up the mission of nonviolent protest in their own communities.

At last, the March trilogy is complete — but as Congressman Lewis reminds us, the march continues. 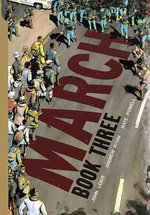