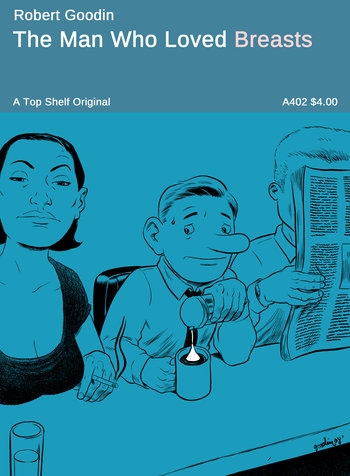 By day, Robert Goodin works in the animation industry on shows like Rugrats, As Told by Ginger, The Wild Thornberrys and American Dad. And by night, he's a comics artist/illustrator whose work has appeared in McSweeney's Quarterly Concern, Mome, Project: Romantic and for the Los Angeles Metro Transit Association.

Several years back,Top Shelf used to distribute a super-deluxe line of his mini-comics, and now we're very proud to publish his latest project: The Man Who Loved Breasts -- a one-shot, 32-page comic book with three amazing stories... In the title piece, “The Man Who Loved Breasts,” we follow Stanley, a man who has worked a dead-end job his whole life. While looking for a way out, he has epiphany that the secret to happiness is to make a living doing what you love. And while you may be able to guess what he loves most, can you guess where his ambitions take him!? The back-up stories are equally fun, with "George Olavatia: Amputee Fetishist" involving a fertility clinic and a man with specialized tastes, and "A 21st Century Cartoonist in King Arthur's Court," where we find out how useful a cartoonist would have been in the middle ages. -- 32-Page Comic Book, 6 5/8" x 9", UPC 094922943705, Diamond: AUG08-4325