Every so often, a graphic novel comes out that is so remarkable and so important, it breaks out of traditional categories, forcing readers and institutions to reconsider their expectations of what the comics medium can do. In 1992, for example, Art Spiegelman's Maus depicted the life of a Holocaust survivor with such innovative power that the Pulitzer Prize committee issued Spiegelman a "Special Award."

Now, the RFK Center for Justice and Human Rights has announced that March: Book One, the first volume of Congressman John Lewis' civil rights memoir co-written with Andrew Aydin and drawn by Nate Powell, will receive a "Special Recognition" award at the 2014 Robert F. Kennedy Book Awards, to be awarded in a ceremony tomorrow night, May 22, in Washington, D.C.

Fittingly for an icon of the civil rights movement, this will be Congressman Lewis' second honor from the RFK Book Awards; his prose autobiography Walking with the Wind won in 1999. The awards, founded in 1980, celebrate those books which best reflect the late Senator Kennedy's ideals of justice, human rights, and equality of opportunity. In his capacity as attorney general, senator, and presidential candidate, Kennedy played a significant role in the civil rights movement throughout the 60s, and indeed will appear in the forthcoming second and third volumes of March.

This honor also places the March team in fine company in another way: the RFK Book Awards' only previous use of the Special Recognition was also for comics, awarded in 1994 to the legendary editorial cartoonist Herblock. 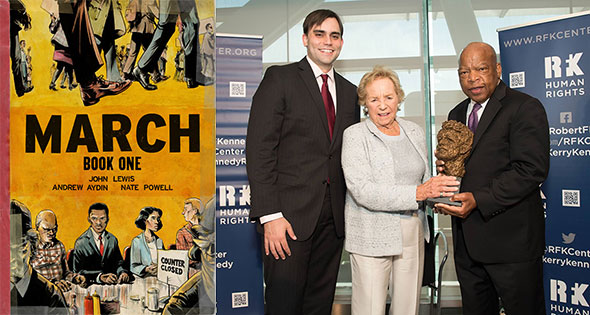 About March: Book One

In March, Congressman John Lewis brings civil rights history to new life in graphic novel form for a new generation of readers, inspired by his memories of an influential 1950s comic book about Martin Luther King that helped mobilize his own generation to join the movement. March: Book One, currently in its 30th week on the New York Times Bestseller List, was also recently awarded the Coretta Scott King Author Honor from the American Library Association (to be distributed in June) and is currently a finalist for three Will Eisner Awards (to be awarded at Comic-Con International in July). This fall, three public and private universities will assign the book for their first-year reading programs, reaching approximately 15,000 freshmen. The next volume in the March trilogy is anticipated for early 2015.