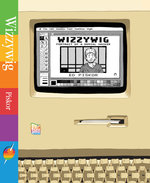 The good folks at Publishers Weekly have announced their Best Books 2012 list -- and Ed Piskor's computer-hacker epic Wizzywig is one of only five titles featured in the graphic novel section!

Here's the brief write-up PW included, which links to a longer review: "The stories of the early hackers are almost too incredible to be true, filled with daring crimes, mad escapes, and twisted pun-ishments. In his graphic novel debut, Piskor uses real-life tales to create the story of Kevin 'Boingthump' Phenicle, a smart, awkward kid (based on a number of real-life hackers) whose computer genius takes him on a long, wild ride of daring escapades, a Robin Hood for the digital age."

Hats off to Ed for this latest in a string of rave reviews! For more information, critical acclaim, a 10-page sample, and even the music video, check out our catalog page for Wizzywig. The book's available from your favorite retailers now, in hardcover or digital format -- if you'd like to pick it up for yourself, or as a gift for the tech-head in your life.