News / Kagan McLeod's time-lapse video is too good to be true!

Kagan McLeod's time-lapse video is too good to be true! 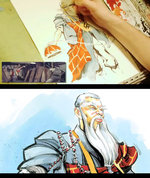 Those who've read Infinite Kung Fu know that Kagan McLeod is a wizard of art... but how many of you have seen him work his magic live? Now you can!

This just-released video shows Kagan drawing his favorite kung fu villain - the blind final boss from the 1976 film Master of the Flying Guillotine! Enjoy clips from the film of this dude in action, as you see him to come to life under Kagan's brush. Don't miss it!