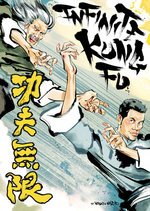 This honor doubles down on PW's previous starred review of Infinite Kung Fu, which concluded: "The great strength of this graphic novel is its originality, but equally impressive are McLeod’s extraordinary illustrations and compelling narrative."

Infinite Kung Fu is available now wherever books are sold - including from your local comic shop, directly from Top Shelf, and digitally through iVerse, Comixology, Google Books, and iTunes.