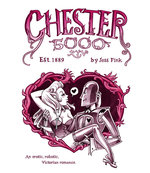 Jess spoke with Tim O'Shea at Robot 6 for a wide-ranging interview that just went live! Find out about her creative process, her own Alan Moore connection, her upcoming autobigraphical book We Can Fix It!, her much-publicized battles with merchandise bootleggers, and more! Dive in, won't you?