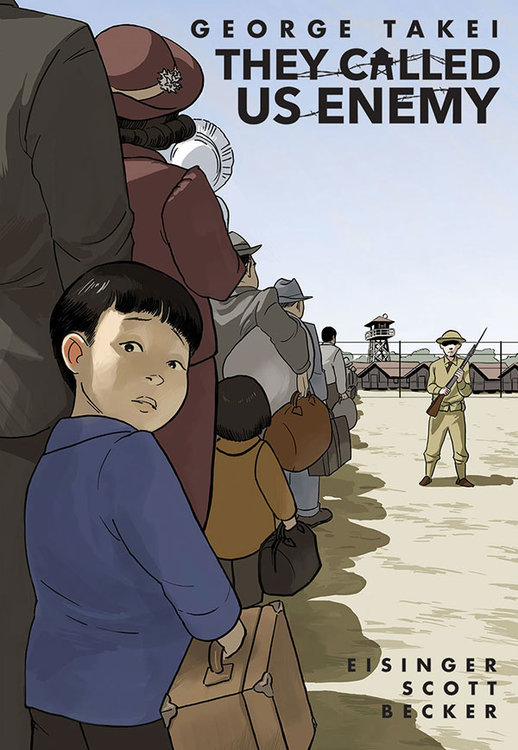 SAN DIEGO, CA (July 19, 2018) — As nations around the globe confront new versions of old debates about immigration, incarceration, and family separation, actor/author/activist George Takei is preparing a beautiful and powerfully resonant graphic memoir of his own direct experience with American xenophobia.

In summer 2019, Top Shelf Productions will publish Takei’s They Called Us Enemy, created in collaboration with co-writers Justin Eisinger & Steven Scott and artist Harmony Becker. George Takei revisits his haunting childhood in American concentration camps, as one of 120,000 Japanese Americans imprisoned by the U.S. government during World War II. Readers will experience the forces that shaped an American icon — and America itself — in this gripping tale of courage, country, loyalty, and love.

Tomorrow at Comic-Con International, co-writers Justin Eisinger and Steven Scott will discuss They Called Us Enemy, and share early glimpses of Harmony Becker’s artwork, in the panel “The Human Condition: Connecting Humanity with Graphic Novels,” Friday at 1 pm in Room 23ABC.

What does it mean to be American? Who gets to decide? When the world is against you, what can one person do? To answer these questions, George Takei joins co-writers Justin Eisinger & Steven Scott and artist Harmony Becker for the journey of a lifetime.

Harmony Becker is an artist and illustrator. She is the creator of the comics Himawari Share, Love Potion, and Anemone and Catharus. She is a member of a multicultural family and has spent time living in South Korea and Japan. Her work often deals with the theme of the language barrier and how it shapes people and their relationships. She currently lives in Columbus, Ohio.