After several years Ivan Brunetti returns with a fabulous new issue of his comic Schizo. This fourth issue has been a long time coming, and i'm here to tell you it is well worth the wait.

The cover here is a reprint of a strip Brunetti did in appreciation of one of his heroes, Charles Schulz, after Schultz announced his retirement. No coincidence either, i would imagine, since, while Schulz was never as nihilistic as Brunetti, both share many of the same themes throughout their work. As Brunetti puts it in the strip in question, "The hurt, the depression, the loneliness, the rejection... Schulz has generously laid his psyche bare."

Not since Crumb has an alternative cartoonist put it all on the line like Brunetti has is in oeuvre. The encouraging thing about this fourth issue for is, specifically that Brunetti has Gasp!, found his soul. There is a decided attempt to grow as a man, to reach for and realize who and what he is.

Indeed, the inside cover relates what seems to be a typical day for Ivan. Near the end we see him sitting in Buddhist prayer, followed in the last panel by a shot of him walking down a rainy street with a smile on his face. In a strip called "You Wanna Fight Me?" we see Brunetti assisting a group of kids who have lost their ball, after which he says to himself, "I want to be filled with boundless love for all things living. (I'm working on it.)" Bravo, Ivan!!

And while the self-loathing is still here, the seething raging hate for all of mankind seems to be on the want. Gone are the knives, guns, and assorted weapons of torture. Brunetti seems to be somewhat at peace with his fellow man, or at least quite a bit more tolerant. No more casting down on humanity, or the sadistic maiming, killing and/or torturing.

Also of note is a newfound appreciation and noticeable externalization of themes in a series of strips dedicated to the lives and work of various (in)famous literary greats, philosophers, and artists, as well as a handful of strips featuring nondescript painters and their process (whose muse seems more often than not to be a result of unrequited love), all of which reflect Brunetti's own worldview. It's this externalization which leads this reader to believe that Ivan seems to have made a great leap not just as a cartoonist, but as a man.

Last, Brunetti's line has taken on a new style in this more recent work... a thinner wispy line, reminiscent of his contemporary, the great Steven (Ribs!) Weissman. All very very good stuff. 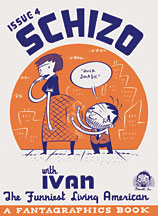 This oversized book is hard to miss, if a given retailer chooses to stock. Do yourself a favor and pick it up. If your retailer doesn't have it, ask him to get it for you. Otherwise, go to the source at Fantagraphics. www.fantagraphics.com