MARCH wins the Walter Award from We Need Diverse Books 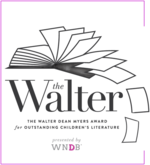 The groundbreaking March trilogy reached another milestone this week, as the organization We Need Diverse Books declared it the winner of their second annual Walter Dean Myers Award for Outstanding Children’s Literature – Young Adult Category.

March: Book Three was declared the winner of "The Walter," which is named in memory of children’s and young adult author Walter Dean Myers (1937-2014) and celebrates diversity in teen literature. Three honor books were also named: Watched by Marina Budhos, If I Was Your Girl by Meredith Russo, and The Sun Is Also a Star by Nicola Yoon. A ceremony honoring the winners will take place at the Library of Congress in Washington, D.C., on March 31, 2017.

WNDB will donate a minimum of 2,000 copies of the 2017 Walter Award winner, March: Book Three, across the United States to schools with limited budgets. For more information, visit www.weneeddiversebooks.org.