News / RETURN OF THE DAPPER MEN Comes to Top Shelf!

RETURN OF THE DAPPER MEN Comes to Top Shelf! 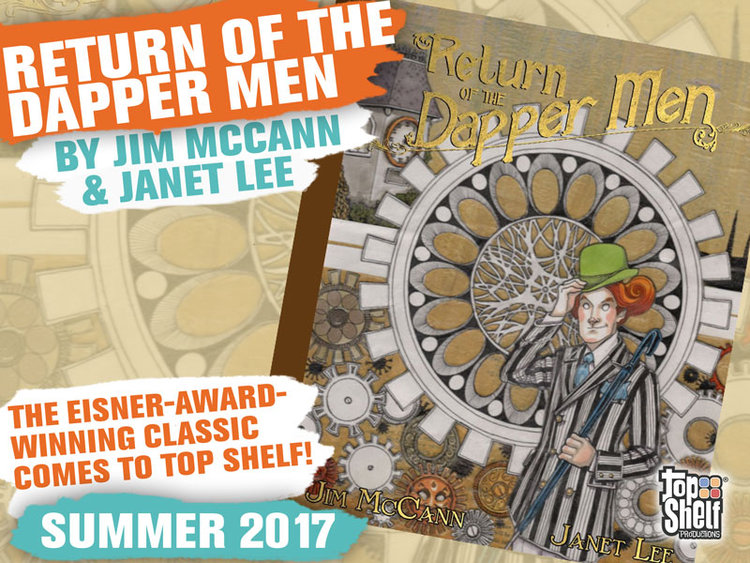 NEW YORK (October 10, 2016) — Return of the Dapper Men, the Eisner-award-winning graphic novel by Jim McCann and Janet Lee, will be republished in a deluxe new edition in summer 2017 from its new home at Top Shelf Productions, an imprint of IDW Publishing.

The deal, announced yesterday at New York Comic Con, also includes the long-awaited expansion of the Dapper Men story into a trilogy. McCann and Lee reunite for an all-new sequel, Time of the Dapper Men, which will be released in summer 2018.

“After seeing three disparate pieces of Janet's art one Christmas I couldn't get them out of my head," says writer Jim McCann. "In my mind they fit into a story, and that tale became the Dapper Men saga. I'm so lucky Janet said yes to taking this journey together, and now, thanks to Top Shelf/IDW, our characters get to continue their journeys in the trilogy we envisioned."

Artist Janet Lee adds, “From the very first, Jim and I dreamed that the adventures of Ayden, Zoe, and the inhabitants of Anorev would be told in a trilogy of books. I can’t tell you how thrilled I am to be working with the folks at Top Shelf to make that happen. Top Shelf is the home of comics that changed my life. Now my beloved characters have a home there too.”

“Jim and Janet have created a world of wonder that appeals not only to children but to the child inside all of us," says Top Shelf editor-in-chief Chris Staros. "I’m very pleased to be working with them as they bring the world of the Dapper Men to new life at Top Shelf.”

McCann adds a few hints about what comes next for the world of the Dapper Men: "We will see more whimsy, more choices to be made, more challenges to overcome, lessons to learn, and of course more new characters for Janet to draw in Time of the Dapper Men. I'd tell you about the final book, but let's just say the ending of Time will have you guessing and gasping for more. And you'll get it. Finally." 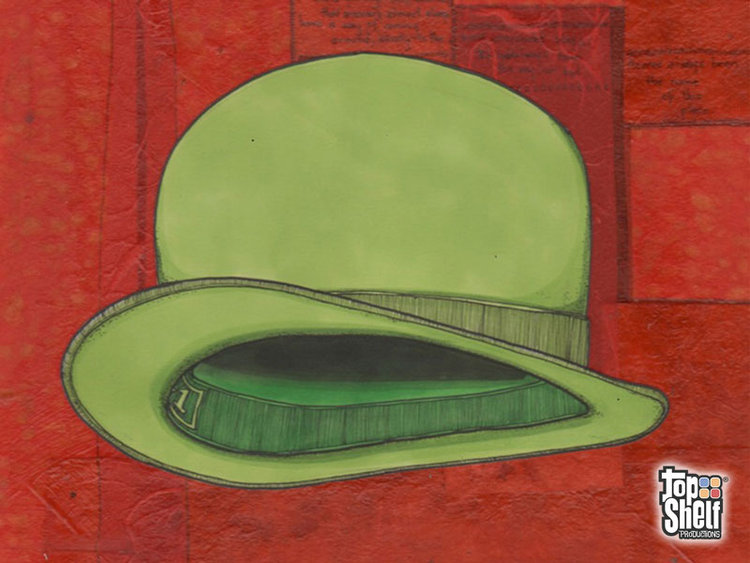 About Return of the Dapper Men:

"The writing is lyrical and reads like a forgotten fairy tale...The artwork is often stunning, with a texture and depth." — The New York Times

"A true dazzler that speaks on multiple levels for both child and adult readers, and one that gets richer with each read." — Booklist (starred review)

“This book is everything the hype promised it would be…a mind-opening, eye-shutting book that sings to your dreams and dreams of your songs.” — Comic Book Resources

Welcome to Anorev, a land where time has no meaning. Robots work and children play, but the play is no fun and the work is no use. A curious boy named Ayden and his robot friend Zoe know that something’s missing, but they can’t imagine what it might be… until 314 identical men in green bowler hats fall from the sky. At last, our heroes have a chance to discover what happened to their world, what might start the clocks back up again, and what tomorrow really means.