MARCH: BOOK THREE is here — and on Rachel Maddow tonight! 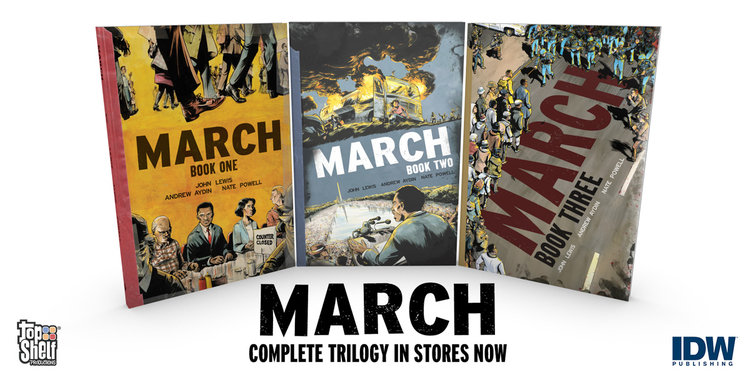 More than five years after the project was first announced, Top Shelf Productions is honored to reach a new milestone this week with the third and final volume of March, the award-winning and #1 bestselling graphic novel trilogy by Congressman John Lewis, Andrew Aydin, and Nate Powell.

As the New York Times reports this morning, March has become a groundbreaking phenomenon, reaching classrooms across America and inspiring hundreds of thousands of readers with the story of John Lewis and the power of nonviolence.

Now, in the wake of the March team's recent Eisner Award and "Children's March" at Comic-Con, the trilogy comes to an incredible conclusion with March: Book Three, called by the Washington Post "sublime… an achievement on many fronts."

The early reviews are staggering:

Pick up March: Book Three today... and don't miss the entire MARCH team on The Rachel Maddow Show, tonight on MSNBC at 9pm!