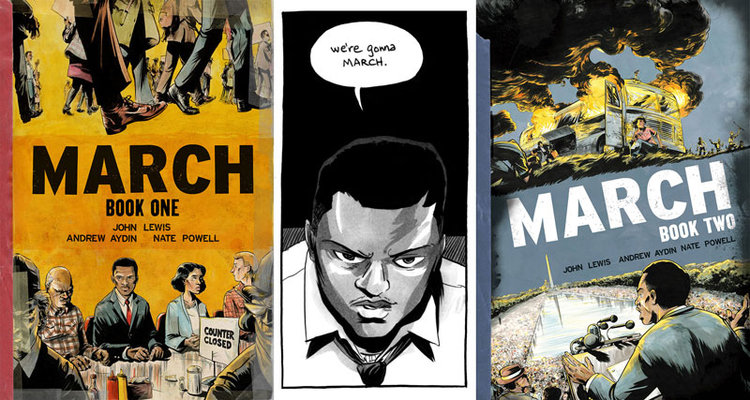 NEW YORK (May 5, 2016) — When John Lewis was a college student in Nashville, Tennessee, he attended a workshop on nonviolence that changed his life. Based on the principles of Gandhi and the recent Montgomery Bus Boycott, it also included a comic book — Martin Luther King and the Montgomery Story — as a take-home study aid in nonviolent resistance. “That little book became like a Bible for us,” says Lewis. Fifty years later, he teamed with co-writer Andrew Aydin and artist Nate Powell to adapt his own incredible life story into a series of award-winning graphic novels, entitled MARCH. The MARCH series is a #1 NYT-bestselling phenomenon, earning a Robert F. Kennedy Book Award, becoming a popular selection for university reading programs, and prompting the Washington Post to write, "There is perhaps no more important modern book to be stocked in American school libraries than MARCH."

Now, this groundbreaking graphic novel series reaches the nation’s largest public school system. Congressman Lewis and his MARCH co-creators, Andrew Aydin and Nate Powell, visited New York City today to address hundreds of the city’s social studies teachers about teaching the civil rights movement and their graphic novel series, which is being added to “Passport to Social Studies,” an expansive new curriculum developed by the New York City Department of Education. Students study the civil rights movement in the 8th grade, and now, teachers may choose to utilize lessons developed by the Department of Social Studies that feature scenes from MARCH, to discuss milestones such as John Lewis's speech at the 1963 March on Washington.

In today's session, New York's teachers had a rare opportunity to hear from a seminal figure of history whose story is vitally relevant to the modern day — and who now presents that story in a powerful new format for engaging today's students. 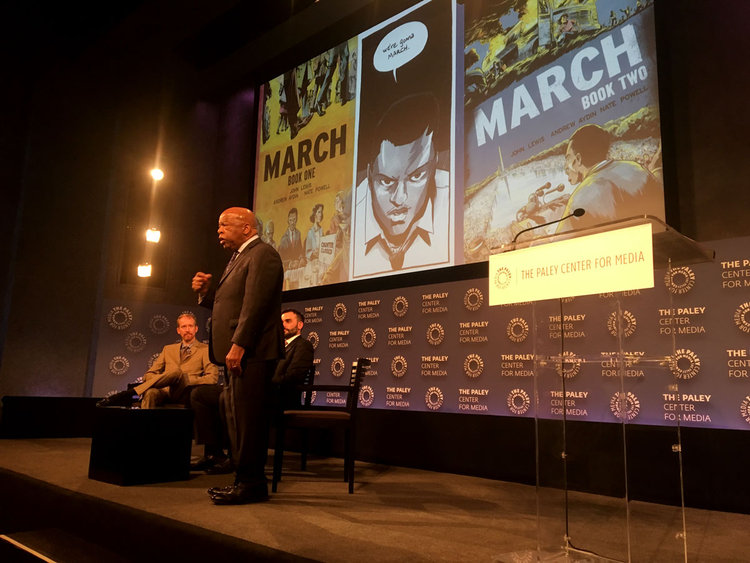 Teachers across the country, at every grade level, have embraced MARCH as a dynamic and powerful visual testimony of the civil rights movement, narrated by one of its major figures. For example: