This weekend is the Rose City Comic Con here in Portland. And what do ya know, but Mark Russell and Shannon Wheeler have another event in support of their book God is Disappointed in You. This time at Floating World Comics! Here's the Facebook invite.

Mark and Shannon both took lots of photos, and Mark did a nice write-up on the Powell's event from Sunday night:

"On Sunday, Mark Russell and Shannon Wheeler were on hand at Powell's City of Books in Portland to promote their new book, God Is Disappointed in You. Rather than do a straightforward reading, though (which nobody really likes, anyway), Mark showed an animated video about Original Sin (which is fruit theft, in case you were wondering) and performed a slide show squeezing the entire Bible down into fifteen minutes, with musical breaks by "King" David Lindenbaum (seen here in costume) and the 'Leles (seen here in ukeleles). Meanwhile, Shannon was busy drawing portraits of people in the audience. Whether it was a personal portrait drawn by an award-winning artist, or a free fortune cookie, everyone left with something. Mark and Shannon will next be performing their weird biblical slide show at the Wordstock Convention on Saturday, 10/5 at 1pm." 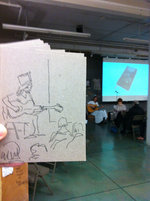 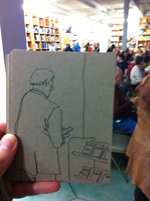 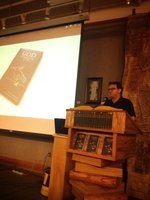 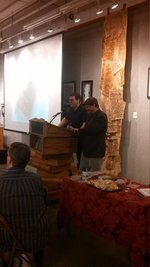 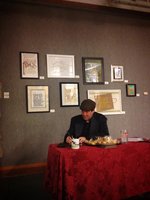