• The Center for Cartoon Arts has graduated its first class. This is great news.

The Center for Cartoon Studies graduated it's first class in May so what better time for one of my infrequent updates. As the school takes on a life of its own it has been increasingly difficult to write updates. At one point I felt like a new parent: I could wrap my arms around the school and understand its simple needs. I could show pictures and write about everything the baby was up to. The school, now a toddler, is stomping all over the place, in nine different directions at once and is kicking up a lot of dust (and still leaving me sleep deprived)!

So without further ado (or strained metaphor) here's a brief update:

Graduation: After two years of hard work, the pioneering class of eighteen "seniors", graduated on May 19! Parents and loved ones came to White River Junction from all corners of the country to celebrate the graduates' achievements. One highlight of the spirited and emotionally charged day was the great Patrick McDonnell's commencement speech. Patrick's comic strip Mutts is a true gem (and so too, not surprisingly, is Patrick and his wife Karen).

I Know Joe Kimpel: This site was created by CCS alumni Adam Staffaroni and Emily Wieja to showcase (and sell) the great work produced by CCSers. If you are curious to see what this next generation of cartoonists is making check it out.

CCS Now Offers Master of Fine Arts Degrees: This is huge for the school. Huge. Here's the skinny.

Summer Workshops: Beginning Monday July 9th, our third summer offering workshops for ages 16 and up. A second week (beginning July 16) was added due to demand. Participants came from as far away as England, San Diego, and Texas. There are a few spaces left if you or someone you know is interested. They are a lot of fun.

CCS Book Projects: CCS is involved in various publishing projects including working with Norton in redesigning Will Eisner's landmark instructional books. CCS's first book with Hyperion Books for Children, Houdini, The Handcuff King, by Jason Lutes and Nick Bertozzi is out in stores and is receiving rave reviews. The next book in the series, Satchel Paige, Striking Out Jim Crow, by myself and Rich Tommaso, will be released in December. The third book in the series will be Thoreau at Walden by John Porcellino. The Houdini book can be ordered through Amazon. You can get a great read and support the school in one fell swoop.

Greeting Cards: CCS student work will be featured in a line of greeting cards next summer produced by Sunrise Greetings (an independent subsidiary of Hallmark Card). It was great working with Sunrise… the students sold lots of work and the cards look great.

Looking Forward: Next fall CCS is honored to have Jason Lutes as visiting faculty. Jason is the cartoonist responsible for the amazing graphic novels Jar of Fools and Berlin. Other guests will include Lynda Barry, Drew Weing, Eleanor Davis, Alison Bechdel, and Gary Trudeau. And that is just for the fall! And also in WRJ this year will be CCS's third Fellow, T. Edward Bak. Thanks to the LEF Foundation for keeping our fellowship program rolling along!

Congratulations: To Sam Gaskin and Alexis Frederick-Frost, two members of CCS first class who won the prestigious Xeric Award to publish their own comic. Tp the CCS's Sundays' crew for producing Sundays, a beautiful anthology that was one of the "buzz books" of New York City's MoCCA Comics Festival ( all these books available through Joe Kimpel). To fellow Vermont cartoonist and CCS visiting artist Alison Bechdel, on the success of her amazing memoir Fun Home. And Congrads to Phineas Roy Ollie, CCS managing director Michelle Ollie's new son who came early, in time to witness the CCS graduation.

• There's some great stuff in the current Diamond Previews catalog (although thankfully less than normal), including the following items i'll keep my eyes open for.

… Sunday Press (the guy who did that mammoth and gorgeous Little Nemo book) is releasing volume one of the oversized Gasoline Alley Sundays, in full color. It's called Sundays with Walt and Skeezix, and makes a perfect companion the series Drawn & Quarterly is producing with the b&w dailies. 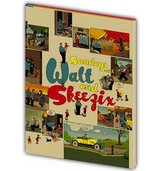 … And original Goon graphic novel by Eric Powell (from Dark Horse), is on its way, title Chinatown and the Mystery of Mr. Wicker. Eric is one of the most outstanding cartoonists in a field overflowing with fine creators. And The Goon is just wild campy fun.

… The Hanna-Barbera Treasury, by Jerry Beck. Jerry and Amid Amini run the wonderful cartoon blog Cartoon Brew, and this book looks to be a treasure trove a cartoony goodness. 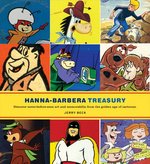 … The Completely Mad Don Martin, from Running Press. Whoo hoo! My god i loved Don Martin's comics in the pages of MAD when i was growing up. This looks to be a set not unlike the beautiful slipcased Farside and Calvin & Hobbes collections Andrews McMeel issued a few years ago. And if memory serves correct, this will be the first in a series collecting work by the second generation of Mad creators. (The generation i grew up on, including the great Sergio Aragones and Al Jafee.) Man, imagine the entirety of Sergio brilliant Mad Marginals!

… Finally, the long awaited Jack Kirby biography which Mark Evanier has been working on forever. Titled Kirby: King of Comics, this is perfectly timed to appear alongside the way overdue deluxe Kirby collections making the rounds these days. 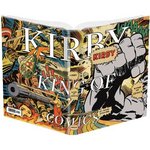 • Gregory Benton sent a follow-up email (with pictures) of the following show at Space 1026, SCAB ON MY BRAIN!, which opened last Friday, July 6.

Space 1026 presents "Scab On My Brain!"Â, a group exhibition curated by New York artist Jordin Isip. This assembled group of twelve artists use their own unique and personal visual vocabulary to create figurative narratives that are both allegorical and psychological. In some works humans can be beastial, weak, imperfect, and vulnerable as they journey through imagined lands, in others, the protagonists may be quietly heroic in seemingly mundane and everyday environments. But whether these images (drawings, paintings, silkscreens, and sculpture) are multi-layered, oozing, cacophonous, and hyperbolic or understated, minimal, reserved and poetic we are compelled to enter realms devised by artists with distinct sensibilities.

Jordan Awan, Gregory Benton, Kiersten Essenpreis, Jordin Isip, Aya Kakeda and Liz Lee are based in New York City.While Carl Dunn and Evah Fan also have strong New York roots they now live in Providence and Los Angeles respectively. Mariano Ching and Louie Cordero live in the Philippines, James Kirkpatrick in Canada, and Nate Williams in Argentina. Space 1026 presents "Scab On My Brain!"Â, a group exhibition curated by New York artist Jordin Isip. This assembled group of twelve artists use their own unique and personal visual vocabulary to create figurative narratives that are both allegorical and psychological. In some works humans can be beastial, weak, imperfect, and vulnerable as they journey through imagined lands, in others, the protagonists may be quietly heroic in seemingly mundane and everyday environments. But whether these images (drawings, paintings, silkscreens, and sculpture) are multi-layered, oozing, cacophonous, and hyperbolic or understated, minimal, reserved and poetic we are compelled to enter realms devised by artists with distinct sensibilities. 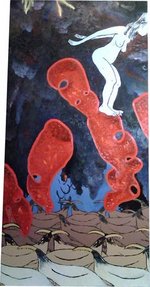 Here are more pics from the show. (Thanks, Gregory.) 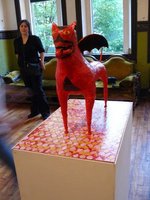 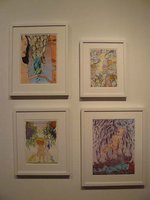 • Jim (JH) Williams sent me a link to a fab new multi-artist website called Naked Fat Rave. Check it out! 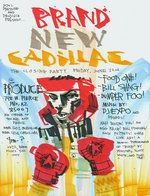