Lots of good stuff i've been watching and reading.

Also, at the Faster Than Light radio show, a fabulous podcast with Eddie Campbell.

• Craig Thompson came over a few days ago, and we watched my very first film by French filmmaker Jean-Luc Godard, called Masculin Feminin... wow, that's some crazy stuff. Reading up on him after watching the film itself, i found out this was a more documentary style film, as compared to his more well known films, like Breathless and Contempt. Still, as a snapshot of French youth in the mid-sixties, this is a delightful study.

• I'm finally done reading a giant pile of comics from SPX and Stumptown. It was all pretty damn good, but a few things really stood out for me. First, kudos to Christopher Baldwin for making a fantastic mini-masterpiece with his comic, I Am Hans Krunkel. I'm familiar with Christopher's more widely know strip, Bruno, a superbly crafted strip that has been running for a freaking decade. Impressive. But to be honest, Bruno just doesn't float my boat.

That said, I Am Hans Krunkel represents (for me) a monumental leap in his cartooning. The move from slice-of-life to a straight drama (in the independent auteur cinema vein), and from noodling cartooning to a more realistic, sketchy photo-referenced art style seems more convincing to me, and a better use of Baldwin's fine talents as both writer and artist.

• Bugbear #1. The two-person anthology, featuring Eleanor Davis and Drew Weing who together form Little House Comics. Damn, these two amazing cartoonists need to be much wider known than they currently are. From the beautiful and luscious silk-screened cover by Drew, to a string of hits inside, Bugbear is a must-read comic for any of you out there who consider yourselves part of the comics cognoscenti. Both artists have such an absolute command of their work, that each individual story employs a slightly different, yet consistently wonderful style. Davis' story "Camping Trip With My Dad and Sister c. 1997," is my favorite pick. Delicately drawn and sparsely written, this strip is infused with a naturalist's appreciation for the natural world, and includes some exquisite drawings of various flora and fauna.

Also, from Eleanor Davis, a comic called The Beast Mother. A neat spin combining the Russian Baba Yaga myth and the classic mercenary dragon-slayer story, this is super. Davis really knows how to tell a story. And her art is incredible. I want MORE!

• Speaking of Dragon-slayers, K. Thor Jensen's knew book, KSOFM is stuck squarely in an epic fantasy world, where the real men wear chainmail and swing a hefty sword. In this, the hero is sent to dispatch a gnarly, mutant giant; the self-proclaimed "King Shit of this particular Fuck Mountain." Drawn very fast and loose, it looks like Thor whipped this out in just a few hours. Nevertheless, it's a gem. Great great comics.

• Alec Longstreth takes a crazy left turn from his ongoing serial "Basewood," and tells us the autobiographical story of his own intense indoctrination into comics, and his big big love for the medium. Alec's passion is bordering on psychotic, and this tenth issue of his book Phase 7, is a blast. Most yawn-inducing "how i found comics" stories are usually hideous, but here Alec's writing and pacing is excellent. Take a bow, Alec.

• Got a glimpse of Lauren Weinstein's next book in a mini-comic called Becky and Friends. Drawn in b&w, her work here is just awesome. Riffing on a cartoony and yet simultaneously realistic style not unlike David Collier, her pages are much more densely packed than normal, and the story of a wallflower teen forced to attend a Christian sports camp is really fun. The story, called "Horse Camp," is set to run in a book scheduled for '07 called Stuck in the Middle, published by Viking.

• Finally, the third issue of Papercutter solidifies editor/publisher Greg Means' stature as a go-to guy with his Tugboat Press, and one to keep your eye on. With all due respect the plethora of steroid-injected vanity anthologies out there stealing all the thunder (most of which i dig all the same), i nominate the humble Papercutter as The Best anthology in North American comics. Each issue features only two or three cartoonists, all of whom Means seems to be able to coax just right in order for them to produce some of their finest work ever. (Somewhere in these archives i've gushed about the first two issues.) In issue #3, we see two lengthier tales … "Untitled," by Elijah J. Brubaker, and "Burden," by Graham Annable … and a stunning one-pager by Lilli Carre. Exceptional work all around. 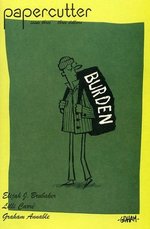