Cartoonist and long-time friend Garret Izumi and myself drove two hours hours south yesterday to the University of Oregon in Eugene, to see a lecture by Scott McCloud. Apparently it's only the third or fourth time he's done this particular talk, although as tight and perfectly executed as it was, i almost find this hard to believe.

The lecture was broken down into three parts. The first, a brief overview of his forthcoming third academic book, Making Comics, was prefaced by a fast-paced and delightfully funny author biography. McCloud's deft use of Powerpoint as a storytelling medium in itself is unparalleled. 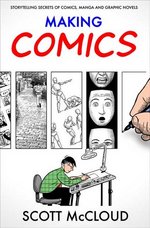 He then talked briefly about a formal comics theory he calls The Four Tribes, representing different schools of thought and emphasis about the medium (if i recall, essentially Craft, Story, Formalism, and The Auteur), and how these various schools can and do overlap. This part of the talk blew my mind. I can only hope that he makes a book collecting these ideas one day. (And offered to publish said book if he ever needed to find a publisher for it.)

Lastly, he talked of course about his love of web comics … a topic which he discussed at length over the second half of his last book, Reinventing Comics. In Reinventing Comics the tone McCloud used seemed at least in part to intimate that web comics were THE future of comics, and print comics merely a sadly dying breed. He now seems to have tweaked this view, acknowledging the limits of web comics (mostly technical limitations), while at the same time admitting merits of comics as printed matter. No more "either/or" proposition.

Where Scott DID sell me on the merits of comics viewed through the new web-based format, is on the idea of the internet as primarily just a new tool in the toolbox for telling stories with words and images. He's clearly given this a great deal of thought, and no matter where one might stand on this debate, McCloud's ideas are absolutely a critical part of the discussion.

Truly a brilliant mind. This was a thoroughly riveting Powerpoint chalk-talk. Thanks, Scott. Kudos also to my old prof Ken O'Connell, for his continuing mission to infuse his enthusiasm for comics into the curriculum at U of O; and especially to the head of the Comp Lit program, Lisa Freinkel, for bring comics into the literary fold.

It's kind of an unexpected, though not unreasonable twist in finding a college market for comics. We've been trying to quietly sneak comics in through the Art School for so long (and all this time to their utter disdain), who would have imagined that in the end, it would be the Lit Department who've opened the door. If Lisa and Ken keep this up, Eugene might just become a thriving Sister City to the Comics Mecca that is Portland.

• Meanwhile, here's a delightful illustration by German cartoonist Mawil (creator of our own Beach Safari), for the wedding invitation of Sebastian Oehler, who works for the German comics publisher Reprodukt. 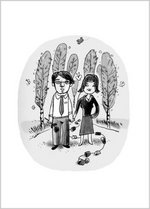 Congrats! Sebastian, your wedding gift from the U.S. is in sending fellow Deutschlander Dirk Nowitzski and the Dallas Mavericks to the NBA FInals for the first time in their history.

•Â Yes, that's right... the table has been set. The run & gun Phoenix Suns ran out of gas, and without the shot-blocking presence of Amare Stoudemire and Kurt Thomas they just couldn't keep up the pace. For the Title, we'll be watching the Dallas Mavericks vs. the Miami Heat (also in their first trip to the NBA Finals). Even though i'm sad to see the Suns fall, it'll be nice to see some fresh faces in the Finals. My call … Dallas in seven games. Shaq is playing quite inspired, and Dwayne Wade is a future Hall-of-Famer, but i think they'll eventually go down to the mighty Mavs.