Super-Spy and Pistolwhip cartoonist Matt Kindt attended Angouleme this year, and has graciously blessed us with a full report, complete with pics. Angoueme (the name of the festival AND the city that hosts it, in the south of France) is the largest and most important comics festival of any sort, in the western world. (I've heard tales of conventions in Japan where the exhibitors alone number in the hundreds of thousands, so i don't think even Angouleme holds a candle to this.) Many thanks to Matt for letting us run his report here at Hey, Bartender.

First, just so y'all know, i have been officially forbidden from writing about politics on this blog. C'est la vie. I'll refrain from rambling on about my loathing at the loss of civic duty in our country, and instead i'll provide a few links to some excellent news-sites and policy-wonk blogs. All i can say is this; stay informed people, contact your congress-person, and vote…it's The People and our very country at stake here.

Oh, and for a little insight into the pre-meditated War in Iraq (going back to the mid-nineties), check out the actual website of the neo-con think tank that created it.

And now on with the show.

Fun in Angouleme. By Matt Kindt.

It was a 2 hour train ride form Paris to Angouleme. A very cozy small medieval town on a hilltop (untouched by World War II ”“ I checked the history before we left in case there were any Super Spy ideas waiting to be discovered).

Already, the festival was unlike anything in the US. There wasn’t a super-hero t-shirt to be seen and you couldn’t tell the comic book fan from the normal citizen. Instead of one big convention hall or center, the publisher and exhibits were spread out in large temporary tents throughout the town. This helped to disperse the crowds a little bit and made it more interesting to walk from tent to tent instead of being stuck in a big smelly convention center all day.

One of the many street paintings in Angouleme. 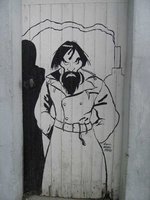 Still a little groggy from the travel and time change I woke up at noon (after dinner till 3am and several episodes of the Indy Spinner Rack podcast to pass the time as I laid there trying to get to sleep).

The first thing on the itinerary for the day was a TV interview with the French art channel. The publisher warned me of this ahead of time and I thought, ”˜okay, there will be whatever version of a public access channel over there doing interviews’. But is was a legitimate TV station ”“ Channel 5 which had been on at the hotel earlier and covers all the arts. The journalist (thankfully) spoke English (which isn’t always a given) and told me she’d just come from an interview with Jim Lee. This is the first inkling i got that I’d stepped into a bizarro world where comics (and Indy comics) were actually somewhat respected as an art form and of general interest to the public. Strange. The journalist from Channel 5 wasn’t just covering a story. She’d been reading (and liked) most of the books she was covering at the festival. She wasn’t covering a story about comics “not being just for kids anymore”. She was covering adult graphic novels that just happened to be in comics form. After the interview the journalist asked for a sketch (another first). They supplied me with a nice piece of watercolor paper and I sat to draw and the cameraman filmed the entire thing. It was starting to become clear that they loved their comics here.

After the interview it was off to a press conference, which was in a big room in the old historical Hotel DeVille building at the center of town. It was a large ballroom area with tables and chairs. The creators would sit down with their publisher and then wait for interested journalists to sit down as well. Four journalists and a photographer ended up sitting at my table and firing questions at me (in French). Luckily my publisher was there and fielded the questions and translated them for me and then my answers back to them. They sat around the table chain smoking and writing everything down in little dime notepads just like in the old days. They weren’t interested in my age or my background or how I got published. They wanted to know my influences. Why was I telling espionage stories? Why were my stories disjointed and told out of sequence. Why weren’t there any captions? I mentioned Joseph Heller’s Catch 22 as a major influence and I could hear the crickets. Mentioning Tin Tin seemed to make them happy though and I was suddenly happy to have put a few homages to Herge in the Pistolwhip books.

Everyone I talked to and was questioned by really knew comics and what made them work and what didn’t. I’d have taken this any day over sitting at a booth across from the Toxic Avenger shouting into a microphone with a crowd gathering around him.

Once I got some free time I started walking around the festival to see what was there. What there wasn’t was super-heroes. Anywhere. The large mainstream booths were all the large oversized hardcover full color albums with talking cats, pirates, mysteries, Agatha Christie adaptations, World War II adventure and fantasy. No super-heroes. I guess I knew that going in but seeing a giant booth with thousands of these books made it reality. My publisher would explain to me later that most of those books were crap (like most of everything) but in French you just couldn’t tell. All of the artwork and color looked fantastic.

The Indy books were in another long tent that was just packed. On Saturday (the busiest day) you could barely walk through the Indy section. As I walked around there were huge lines as creators sat at tables signing and sketching for fans. I stopped to watch Blutch, a French artist that a friend had recommended. He was doing sketches but these weren’t quick doodles and a signature. He had broken out his pastels and his watercolors and his brushes and was doing full-blown illustrations in the front page of his book for everyone in line. We watched for a few minutes and came back at the end of the day and he was still working. Now I understood why my publisher had asked if I minded doing sketches during my signing. I had said ”˜sure’ since I usually do a little doodle and sign the books anyway, no problem. What they expect from creators in France was a little different.

Okay, this could have just as easily been at Wizard World. 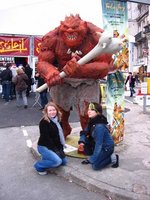 I went out to the art store and bought some nice water color paper and at the signing I did in Paris (a store ironically called Super Heros which carried nothing but Indy books) I spent three hours doing full blown inked and water colored illustrations for the people that came up with books to sign. I was drawing and inking and water coloring faster than I ever had before and I was having a great time. The people expected it but they were just so excited to stand there and watch you draw that it didn’t matter. There weren’t excited about the toys or movies. They were excited about the comics.

Art from the kids exhibit in Angouleme. The artist that did this page was 10 years old. 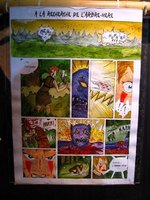 We ended our trip in Angouleme with a trip to the Comic Book Art Museum. It alone is worth a trip to the city. In addition to the rotating exhibits they had a huge archive of original art from the 1800’s to the present day. It was amazing. To see the line and brushwork of Charles Burns and Hugo Pratt in person makes all the difference. 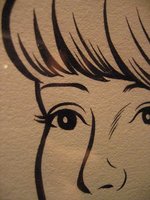 And then walking up to a Hal Foster original Prince Valiant which you’ve seen forever taking up a few inches of space in the paper since you were a kid. You see page framed on the wall and realize that the original art for those few inches is over three feet long.