• Yeah, State of the Union tonight!! Whoo hoo! Go Team America, Fuck Yeah! Uh... yeah. Well, i won't bore anyone with my thoughts, but if anyone wants a nice run-down of the bullshit contained therein, just check out the smack-downs at Think Progress. (Not sure how long these will stay up, though.)

So what gives with the recent revelation that the mysterious Ronin character, in Brian Michael Bendis' New Avengers, turns out to be Echo … last seen slappin' around Matt Murdock in Bendis' Daredevil. Echo, the svelte, graceful deaf girl who can mimic any physical movement or fighting style, and had the body-type of a sleek but tough female dancer in that title. Now along comes Ronin, and all of a sudden, in costume she looks like a freaking NFL linebacker. On all of the covers and in the promotional pieces i've seen of Ronin, she/he has buff, Schwartzenegger quads, Shaq shoulders and Popeye forearms. Wha huh?! Isn't this somewhat unlikely? 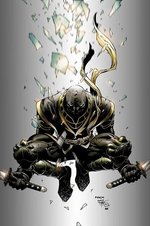 Granted, i haven't read these "reveal" issues yet, but how could he possibly explain this? Fake shoulder pads in the costume, and muscle implants, just to throw people off? I'm a little disappointed.

Be that as it may though, i'm still a HUGE Bendis fan … i've read probably 3/4's of his career output … and i'm willing to give him the benefit of the doubt. Avengers Disassembled was a full-on ass-kickin' super-hero yarn, and i really enjoyed his killer first tpb on New Avengers as well... don't let me down, Brian.

If there are any "indy" comics fans out there who like what's good, not what's just hip; who don't write off super-hero comics as evil by default, but haven't read his work, i highly recommend my two favorite books by Bendis. Read first Daredevil, his already-classic four-year run of which he is now wrapping up, and the ongoing Powers, both from Marvel. Bendis is a master of dialog, and his stories work even having had no familiarity with any company continuity. (They're even better, however, if you are or ever have been a Marvel Zombie.) He makes "spandex" comics human, and infuses all of his work with elements of crime pulp drama, attention to detail, tight characterization and naturalistic dialog.

If you get through those two books and want more, check out Alias, which has very little spandex at all. Excellent material.

(Here's hoping The Brube will be able to keep the flame going when he takes over for Bendis on Daredevil. Rock on, Ed!)