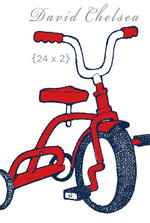 “Twenty-Four Times Two.” The author of David Chelsea in Love and Perspective! picks up Scott McCloud's ball and runs with it in these two 24-Hour Comics …