"Funny and believable, with wonderful expressions and amusing dialogue... There’s a lot readers will enjoy about this coming-of-age camp comedy: romance, a dose of paranormal horror, and laugh-out-loud …

Many LGBTQ adults look back on their youth and wonder: what might have been? Growing up “in the closet” tends to produce a sort of double … 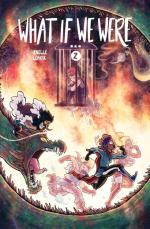 Teen girls rewrite the universe every day… but now they’re going even further! Reunite with Nathalie and Marie — and their new friend/crush Jane Doe — for their wildest, most hilarious games of imagination yet, including an extended fantasy epic!

Marie and Nathalie are the queens of …