"Funny and believable, with wonderful expressions and amusing dialogue... There’s a lot readers will enjoy about this coming-of-age camp comedy: romance, a dose of paranormal horror, and laugh-out-loud … 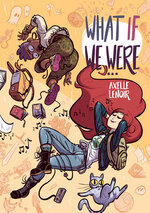 Teen girls rewrite the universe on a daily basis! This comic collection proves there's nothing better than using your imagination... except maybe talking nonsense with your friends. Hey, why not both?

"Axelle Lenoir has a remarkable talent for capturing adolescence... her female characters, here …