California native Scott Morse likes to confuse the comics world by sometimes adding a "C" at the beginning
of his name. His other dirty tricks include the Eisner and Ignatz Award nominated Soulwind, as well as the graphic novels Visitations, Volcanic Revolver, and Magic Pickle for Oni Press, and Ancient Joe for Dark Horse. In animation, Morse has worked as a character designer, storyboard artist, and art director for studios including Disney, Universal, and Cartoon Network. The Barefoot Serpent marks Morse's debut with Top Shelf Productions 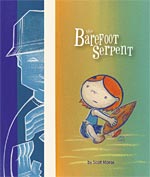 "Both Kurosawa and Scott are storytellers who can work on an intimate scale or on grand epics, but the focus is always on the individual, on characters, and that is what makes them succeed." -- Stan Sakai, from the introduction
"The union of a biography about a master filmmaker [Akira Kurosawa] to …