"Peter Kuper is a filmmaker. In the same way that Egyptians who carved mile upon mile of hieroglyphics on temple walls were … 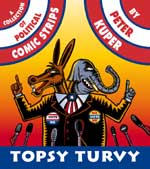 "Kuper's own provocative, conscience driven work has made him one of the most important activist artists of his generation." -- Douglas Wolk, World Art Magazine. A collection of politically charged strips, by the award winning cartoonist Peter Kuper, that stare into the gaping jaws of hypocrisy and …