Aleksandar Zograf (a.k.a. SaÅ¡a Rakezic) was born in 1963, and started publishing comics in various Serbian magazines in 1986. Since the beginning of the 90s, most of his work has been published abroad, in magazines such as Weirdo, The Comics Journal, Zero Zero, Rare Bit Fiends, the Stranger, New City, Cow (U.S.), Lapin (France), Mano, Il
Manifesto, Linus, Kerosene (Italy), Babel (Greece), Galago (Sweden), Stripburger (Slovenia), Das Magazin, Zur Zeit (Switzerland), Fidus (Norway), and Zone 5300 (Holland). His solo comics include Life Under Sanctions, Psychonaut #1 - #3 (Fantagraphics), Flock of Dreamers (Kitchen Sink), and many many more throughout the world. During the NATO bombing campaign in Serbia, he wrote e-mail messages that were posted on the internet in many countries, and they were eventually collected in book form, in UK (Bulletins from Serbia), Italy (Lettere dalla Serbia) and France (E-Mails de Pancevo). His first major collection with Top Shelf is Regards from Serbia. 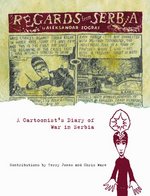