Rich Koslowski's first graphic novel with Top Shelf, Three Fingers, earned an Ignatz Award for creatively blew the doors off the world of animated characters. And in his latest graphic novel, The King, Koslowski tells an amazingly redemptive tale; a fitting tribute to Elvis and the impact he had on people's lives. Rich currently lives in Wisconsin with his wife Sandy and their lovely little girl, Stella. 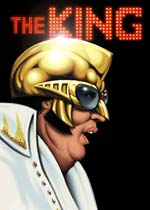 "In the crowded and eclectic world of Elvis literature, once in a while, a breath of fresh air comes along to jolt our senses. Rich Koslowski's The King is one of those rare entries which offers us something different, something which stimulates our senses both narratively and visually. … The …