Jarod Roselló is a Cuban-American cartoonist, writer, and educational researcher from Miami, Florida. His debut graphic novel, The Well-Dressed Bear Will (Never) Be Found, was published in 2015 by Publishing Genius Press. His chapbook, The Star, was the winner of the 2015 Epiphany Literary Magazine Chapbook Contest. His short fiction and comics have been published in The Rumpus, Hobart, Hayden’s Ferry Review, Sonora Review, and The Collagist, among other places. His childhood and educational research has been published in Bank Street Occasional Papers, International Review of Qualitative Research, and Contemporary Issues in Early Childhood. He teaches comics and fiction in the creative writing program at the University of South Florida.

When an evil curse descends upon the city of Martí, it’s up to Red Panda and Moon Bear to put a stop to it… but it won’t be easy! First, they’ll have to solve weird mysteries, fend off new monsters, and uncover the secret history of their neighborhood. With their trusty dog companions and … 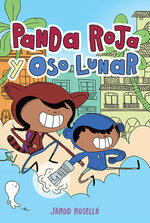 "Red Panda & Moon Bear is fun, wacky and heartfelt. Everyone can enjoy this adventure, but it will resonate especially with Latinx kids. I look forward to seeing more!" — Duncan Tonatiuh, …