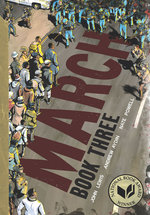 Congratulations are in order once again for Congressman John Lewis, Andrew Aydin, and Nate Powell, as their record-breaking graphic novel March: Book Three has been nominated for Best Reality-Based Work in the 2017 Will Eisner Awards.

The trio won last year in the same category for March: Book Two, while Book Three has received an unprecedented array of honors, including the National Book Award, the Printz Award, the Coretta Scott King Award, and many others.

Join us at the Eisner Award ceremony this summer at Comic-Con International in San Diego, July 21, 2017!