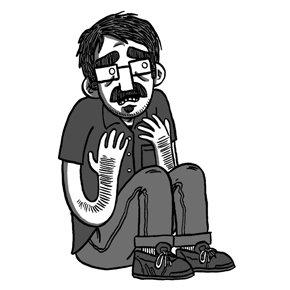 Nick Patten was made by two people who lived in the woods of Wisconsin. As a child he was brilliant in every way and could have very well become a scientist of rockets, but instead he decided to spend all of his cognitive power on drawing. He grew quite fast after this decision, and quickly gained the ability to grow a mustache and other such hairs.

He spent his days drawing up several storms, and was either politely encouraged or asked why he wasn’t building rockets out of science. But he had put science rockets out of his mind, there was only drawing! In 2008 he decided to live in Vermont, another wooded place, to attend the Center for Cartoon Studies. At CCS he has learned to hone the craft of cartooning to a vaguely sharpish point, and has made several minicomics to reflect such. He is currently working on his Thesis comic that promises to be pretty darn good.

Some other comics and drawings can be seen here: nickothing.livejournal.com
or you can just write a friendly email to here.